Football's fight against racism not yet won 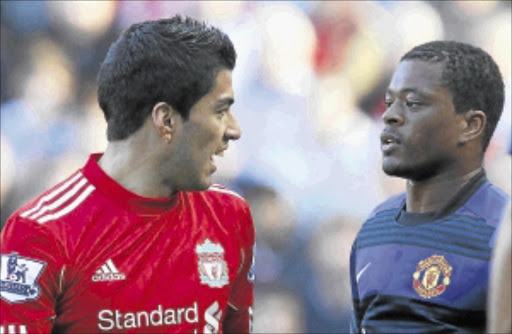 For football fans, Feb. 1 promises to be a sad day

John Terry, one of the most rugged, fearsome and admired defenders anywhere in the world, a natural leader who captains his club, Chelsea, and his country, England, will appear at a London courthouse to face a criminal charge that he abused a black colleague with a torrent of vile, racially insulting language.

Terry insists the whole affair is a misunderstanding.

Born and raised in the ethnic melting pot of east London, he has played with or alongside black players all of his sporting life. Yet video from  an Oct. 23 Premier League match appeared to show him shouting, “You   —  — - — black —  — ” at Queens Park Rangers defender Anton Ferdinand, whose brother, Rio, has long been Terry’s partner in the  England defence.

Terry was quick to issue a statement: “People have leapt to the wrong conclusions about the context of what I was seen to be saying”. He vowed to “fight tooth and nail to prove my innocence” at the West London Magistrates’ Court.

Still, this and other incidents in England and elsewhere in Europe are raising questions about whether efforts to stamp out racist behaviour in the world’s No. 1 sport have taken a big step backward after having made so many strides forward in the past decade or more.

Have racist fans and players simply been lurking, unrepentant, under the surface, instead of being hounded out? Have football authorities, led by FIFA and its European cousin, UEFA, eased up too early in their often-stated determination to rid the global sport of all forms of discrimination?

“We were winning,” said Steve Rotheram, a British lawmaker who successfully lobbied for a parliamentary committee to take a new look at racism in sports, following the Terry case and others.

However, “people have started to ask about institutional racism and, you know, whether or not the sort of improvements that we’d all hoped have happened over the past 20 years are actually embedded”.

The inquiry will start gathering evidence in March. “We’ve got to be ever vigilant, to make certain that racism doesn’t make a comeback,” Rotheram said in a phone interview.

Some countries fight football extremists with greater determination than others. Some believe the only effective way to punish and ostracize extremist fans is by punishing their clubs.

For others, a long-term solution is to educate fans so they police themselves and no longer tolerate bigots in their midst.

“One of the reasons why the UK and Germany, I would say, have been so successful in tackling this problem is through the peer pressure that was exerted toward those fans who were being racist —  when people used the logic of ’Well, how can you abuse the opposition black player when we have black players of our own?’” said Piara Powar, executive director of the FARE network, European football’s anti-discrimination group, partly funded by UEFA.

“When that became the dominant feeling on the terraces and in the stands that was the start of a dynamic, which, in footballing terms, one couldn’t challenge,” he said in a phone interview. “It was nonsensical to abuse black players because they were also your own black players.”

“They were singing, 'Give Toto a banana,’” Inbar, who was at the  game, said in a phone interview. “It is horrible to have racism in a country (where) most of its citizens are Jews. It shouldn’t be here. Racism is in our dark history. We suffered a lot from racism.”

Rather than merely fine Beitar, Israel’s Football Association docked two points from the six-time champions, a significant punishment for a club in danger this season of relegation from the top division.

“That’s what needs to happen to tackle racism. That is how supporters understand the lessons, you know?” Inbar said. “Because they did not learn the lesson when the club is getting fined, they say, 'OK, the club has enough money'.”

“If it was up to me, yes, I would use this punishment more often.”

In Spain, no club has ever been docked points because of racist chants or behaviour by fans. Yet there have been occasions when such  punishment might have been warranted.

Most recently, supporters of Espanyol made monkey sounds — “hoo-hoo-hoo” — at Daniel Alves, Barcelona’s defender from Brazil, in a Jan. 8 league match. The grunts grew as the game progressed and rolled from one section of the crowd to another, tracking Alves’ moves across the field when he had the ball.

Esteban Ibarra of Spain’s Movement Against Intolerance believes not only that Spanish football authorities are lax against racist behaviour but that clubs knowingly turn a blind eye to extremist supporters because their chanting lends ambiance to games.

“Every team in the top flight has these ultras. They are the essence of these racist taunts and chants, and their idea is to try  and get the stadium swept up in their cries, and sometimes that works,” said Ibarra, spokesman for the lobbying group. “They are more aggressive and louder than the rest of crowd, which is generally passive in Spain. They are admitted because it helps (club) directors feel strong and powerful, these intimidating voices filling the stadium.”

“At the moment, the ultras are able to get away with impunity and it’s up to the bodies and club directors to change this. Neither are taking precautions to curb this,” he said in a phone interview.

Espanyol took no action following the Alves incident even though  club president Ramon Condal said, “If we can do something about those chants, we will.”

The Spanish Football Federation said it won’t investigate because the referee did not mention the monkey sounds in his official match report and because Alves said he didn’t hear them.

In England, the Football Association also has never deducted points from a club for fans’ racist behaviour, although its rules allow it to do so.

“This course of action would very much be a last resort and in only the most serious of circumstances,” the FA emailed in response  to questions from the AP. “And instances of racist abuse have been very rare in the last 20 years.”

Which is one reason why Terry’s case and another involving Liverpool striker Luis Suarez came as such a surprise.

An FA disciplinary panel found that during a Premier League match in October, Suarez racially abused Manchester United defender Patrice Evra, who is black and who complained. The panel banned Suarez for eight matches.

That case plus the Terry incident have “shone a light into an area which we know is a problem, we know historically has been a huge problem, but that remained hidden — that of player-on-player abuse, that of racialized interaction, racially abusive interaction, between players,” said the FARE network’s Powar.

However, he also said: “The biggest surprise for me was the way that Liverpool reacted.”

The American-owned club’s vehement support for Suarez — players and manager Kenny Dalglish wore T-shirts featuring his picture and the team complained bitterly about the FA — looked insensitive, crass and misguided to critics. Liverpool also had to apologize this month to an Oldham player who was reduced to tears by insults from its fans during an FA Cup match.

“Liverpool, probably, with hindsight, might well have acted differently,” said Rotheram, the lawmaker elected by voters from the city. Liverpool versus Manchester United is one of the biggest rivalries in European football, “and because it was that particular  football club and Liverpool Football Club, I think that the reaction was tribal,” he added. “In regard to its impact on the city, it’s not been a positive impact, I can tell you.”

In England, at events unconnected to the Terry and Suarez incidents but feeding into the debates they caused, a white woman was filmed spouting racial abuse on a London tram, footage viewed hundreds of thousands of times on YouTube. This month, a judge also sentenced two white men for the 1993 murder of Stephen Lawrence, a black 18-year-old stabbed and left to  die at a south London bus stop.

“The truth is that most people don’t say overtly racist things at sporting events anymore because it is socially unacceptable. But  that doesn’t mean to say that there aren’t racists in football crowds because, at the end of the day, football crowds reflect society,” Rotheram said. “It is a societal problem.”