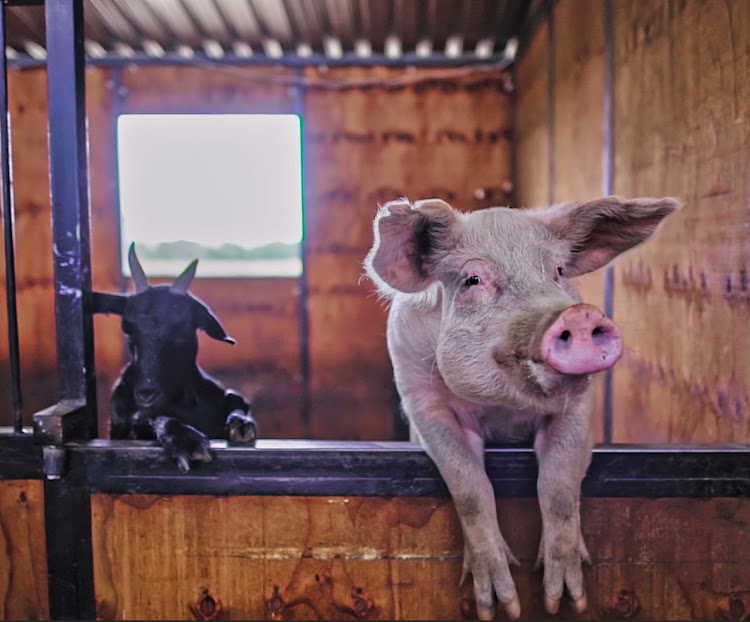 Babe isn’t just a pig. She’s a socialite who loves nothing more than being the centre of attention – except having her belly rubbed. But her best friend is the complete opposite.

Though goats were among the first animals to be tamed by humans, Beverly doesn’t take easily to any creature.

Babe is the exception. Although these animals both have a tragic history, it’s what brought them together.

Beverly was aimlessly wandering the streets of Pietermaritzburg when a passerby found her and took her to the nearest SPCA. There, she hid from everyone. But her solitary lifestyle soon came to an end.

Nearby, Babe was on a truck en route to the abattoir when she made a dash for freedom. In the middle of the highway, she leapt out and fell towards fortune.

A vegan activist driving behind her brought traffic to a standstill, collected the piglet, and took Babe to the SPCA. She was placed in the same pen as Beverly. Amid oinks, bleats, and the clatter of hooves, a friendship blossomed.

Asher’s Farm Sanctuary have since adopted Beverly and Babe. The owners couldn’t bear to separate the bosom pals.

At their new home in Pretoria, Babe enjoys compliments from her caregivers, soaks up the sunshine, and curls up to her companion at the end of the day. Beverly still shies away from others.

But as long as she can nap in peace with Babe nearby, she’s content.

Their rescues have changed more than the course of their lives. If it wasn’t for the

tragedies they faced, these animals may never have discovered the beauty of their unusual friendship.

Dental hygienists (oral hygienists) are concerned with the promotion of oral health and the prevention of dental disease.
SebenzaLIVE
2 years ago