The origin of hot cross buns 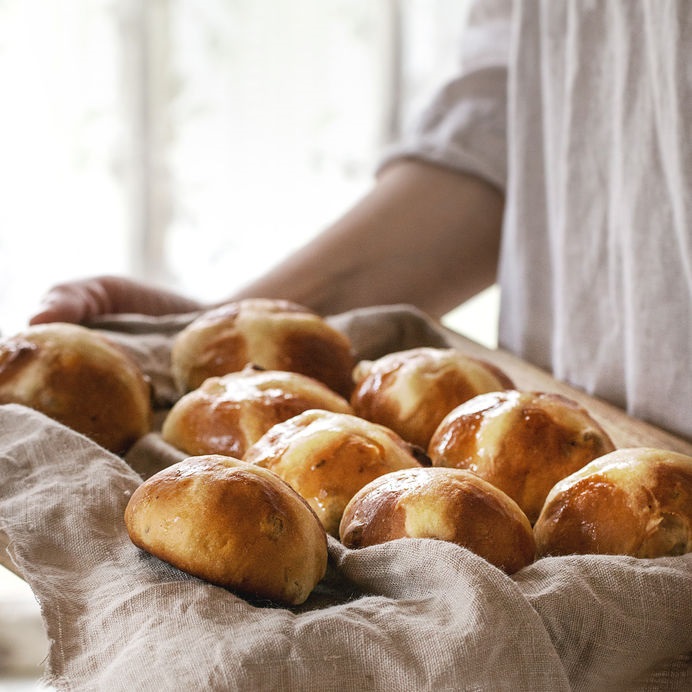 Hot cross buns are rich with history, dating back to the 12th century.
Image: 123RF

Ever wondered where hot cross buns originated and how they fit into the whole Easter tradition?

Well, although there isn’t one clear explanation why this famed food makes its way to the table around Easter, some theories of the origins rest in the Christian symbolism of several stories.

These theories talk about how hot cross buns were being baked and consumed solely on Good Friday, while other tales state that they were being eaten throughout Lent.

There’s also another tale that states that pagan Saxons would bake buns marked with a cross at the beginning of spring in honour of the goddess Eostre, which could very likely be the origin of the name Easter, while the cross represents the rebirth of the world after winter and the four quarters of the moon, as well as the four seasons and the wheel of life.

Even though hot cross buns have supposed pagan origins, Christians reportedly saw the Crucifixion on the bun and, as with many other pre-Christian traditions, they replaced their [cross bun’s] pagan meaning with a Christian one which is the resurrection of Christ at Easter, the cross here representing Christ on the cross.

Hence why they became a staple at Easter time.

They are symbolic of this significant day in the Christian faith when Jesus was crucified.

Each bun is decorated with a cross made from flour paste, which represents the cross on which Christ died.

The spices in hot cross buns are said to represent the spices that were used to embalm Christ after his death.

One old belief says that if you bake your hot cross buns on Good Friday, they won’t go mouldy during the next year.

Another tradition states that a hot cross bun was always kept from the batch baked on Good Friday, in case anyone in the family became ill during the next year.

Here are a few stories being told about hot cross buns:

1. It is told a 12th-century monk introduced the cross to the bun.

The origins of hot cross buns supposedly date back as far as the 12th century.

According to the chronicle, an Anglican monk baked the buns and marked them with a cross in honour of Good Friday.

With time the cross buns gained popularity, and eventually became a symbol of Easter weekend.

Close to the end of the 16th century, Elizabeth I of England passed a law limiting the sale of sweet buns to funerals, Christmas, and the Friday before Easter.

The British were known to be very superstitious.

They believed the buns carried medicinal or magical properties and they soon became fearful of those powers being abused.

Some even believed that buns baked on Good Friday would never go stale.

As a way to get around the law, more and more people began baking these sweet buns at home.

Not only did the buns become popular, but the law became too difficult to enforce and was eventually rescinded.

3. Superstitions about hot cross buns being baked on Good Friday.

While there are also more than a few stories that indicate hot cross buns were baked on Good Friday for superstitious reasons, one tale states that buns baked on this day and hung from the rafters of a home would ward off evil spirits in the coming year.

Another tale was that these buns would protect sailors from shipwreck, while off at sea.

Yet another narrative alludes that sharing the bun with a loved one guarantees friendship in the coming year.

Ever wonder how the professionals get the perfect meaty dish, creamy mash, muffin tops or peeled vegetables? We’ve got the inside scoop.
S Mag
1 year ago

Recipes to try on Easter weekend with your family

The Easter break is upon us and a lot of people are looking forward to the break. With Easter comes the expectations of catching up with family, a ...
Good Life
10 months ago

The only recipe you'll ever need for Pancake Day: it makes crumpets and crepes

Some fine recipes to try on Pie Day

When I was young I was under the impression that pies can only be savoury.
Good Life
1 year ago
Next Article