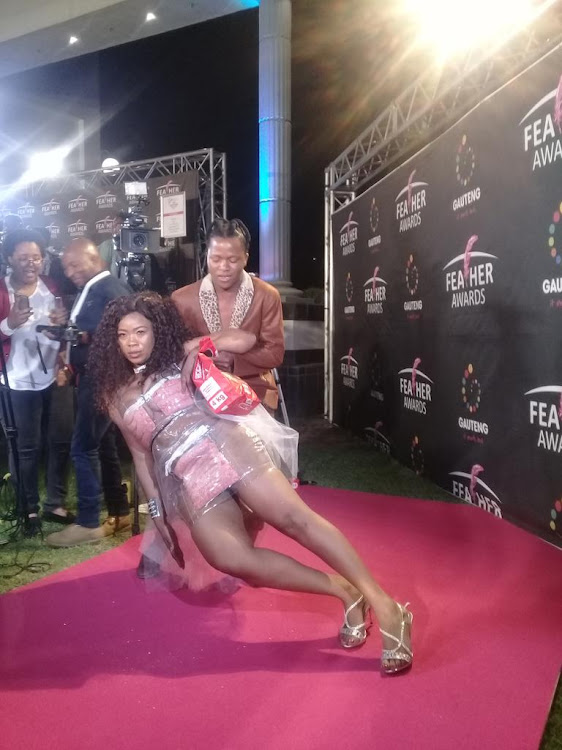 Skolopad posing at the 2017 Feather Awards with her co-designer Koos. Image: CHRIZELDA KEKANA

Maditaba dragged herself to the Feather Awards last week.

She's not really a fan, especially since cheap boxed wine served years back is embedded in her memory like a bullet from a drive-by shooting.

Let's get right into it and dissect the red carpet's best and worst dressed. Kelly Khumalo looked good in a red number. It was a bit muted, though, almost too classy. Madi missed the dramatic Kelly. This was perfect to wear to the taxi association year-end function. Her act with Kyle Deutsch was world class, though.

People kept speculating that the two are dating. Nah, Madi doubts it. He's not married.

Bathong Mshoza. If an identikit of the woman the terrified driver described as having disappeared from his car after giving her a ride at midnight was to be drawn up, Mshoza would fit the picture.

She looked like she haunts some seedy sho't left in Ventersdorp. What the lampshade was going on, Mshoza?

Vathiswa Ndara showed up drowning in sheer fabric. She seriously looked like a walrus wearing chiffon to a baptism. Madi does not get this woman. Such a talented actress who could have any designer dress - and she rocked up in a mosquito net donated by the Red Cross?

Rami Chuene, who Madi thinks is amazing on The Queen, looked good, but the outfit was like a principal receiving an award for the least pregnant students. You could have amped it up a bit ausi.

Skolopad who lost the Drama Queen of the Year award to Zodwa Wabantu said she wasn’t “touched“.
Entertainment
4 years ago

Madi loved DJ Tira's outfit. It reminded Madi of an alter boy, while Lunga Tshabalala was just a big yawn fest. This boy has lost his mojo.

The best dressed has to be Simphiwe Dana. She looked ethereal in David Tlale couture. Absolutely stunning, head to toe.

Alright, Madi is torn as to who should take the worst of the worst title - Skolopad or Zodwa Wabantu. Zodwa, who won the drama queen of the year award, looked horrible, like a zama-zama miner on Guy Fawkes Day.

The dress itself was stunning, but the nudity of it all, Bathong. If Madi sees this aunty's shriveled purse one more time, I swear...

Fame-hungry wannabe Skolopad rocked up wearing voroso. What Madi found sad was that it was the cheap pink one, you know, the kind that comes undone in a pot. All Madi can say is that looking at the sausage on her crotch, some taxi rank butchery may have found an unconventional new way to spice up their insipid boerewors.