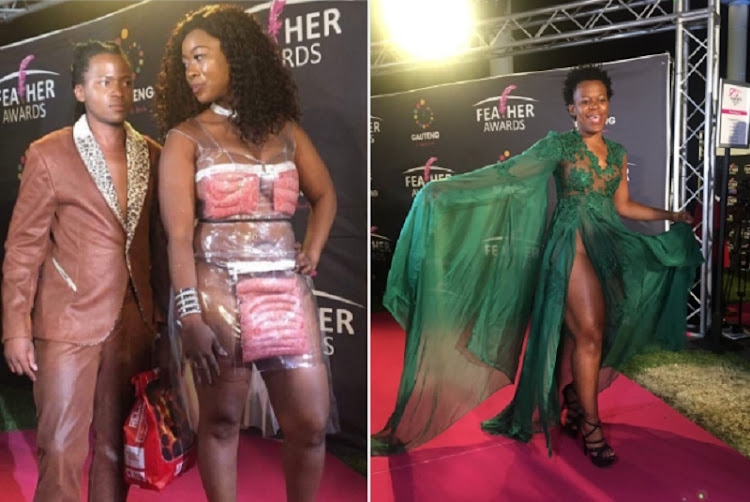 Two of the most provocative stars in the country, Skolopad and Zodwa Wabantu, stole the show at the 2017 Feather Awards - the ninth instalment of the gay-friendly event held at The Theatre on the Track in Kyalami, Midrand last night.

Skolopad said: "I don't eat beef, people have so much 'beef'. I can't stand beef. So wors is my meat of choice."

While Skolopad opted to hide her assets, Zodwa Wabantu had cameras flashing with her no-underwear look. She donned an emerald lace gown, with hip-high slit that left very little to the imagination.

"The design was sent to me by DJ Tira. To me, the green colour represents female power," Zodwa said.

Zodwa also had cameras flashing when she won the award for Drama Queen of the Year, beating Skolopad.

Businesswoman Basetsana Kumalo soared above both of them, however, to win Socialite of the Year.

The duo went up against 'It' celebrity couple Nomzamo Mbatha and Maps Maponyane, as well as BFFs Pearl Thusi and DJ Zinhle.

The night featured stellar performances by Kelly Khumalo and Brenda Mtambo, among others. When it came to the eye candy, All Access Mzansi host K Naomi won Hot Chick of the Year, while Fundis presenter Fezile Makhanya scooped Hunk of the Year. Khumalo and Botswana-born transgender activist Ricki Kgositau were the big winners of the night - with two awards each. Khumalo won Fag-Hag of the Year and Best-Styled. Kgositau was honoured with Role Model of the Year and African Feather of the Night.

Earlier the awards organisers had erroneously released a media statement announcing Skolopad as the winner over Zodwa. "There was an internal error when drafting the press release. We apologise for the incorrect winner being printed," Spokesperson Ashveer Kewalpershad said.

Zodwa Wabantu‚ who is known for her no-nonsense approach recently slammed people‚ who she has labelled “parasites” for using her name for their own ...
Entertainment
4 years ago

Being Skolopad is endangering my life‚ says controversial star

Skolopad claims to be fearing for her safety after allegedly receiving random visits by strangers at her home.
Entertainment
4 years ago

DJ Tira: I never thought one of my hottest properties would be Zodwa

DJ Tira has certainly made one of the biggest gambles of his music career but he is aware of the risks and believes in the power of his find: Zodwa ...
Entertainment
4 years ago
Next Article