Mandela day is not a once-off 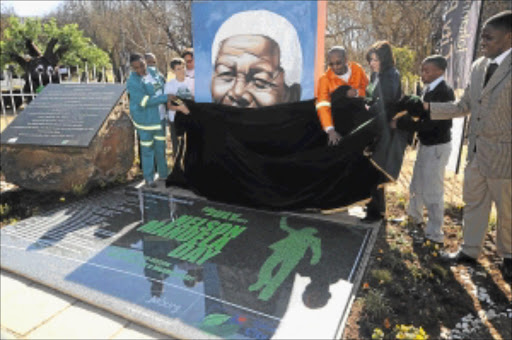 HE Nelson Mandela Centre welcomes the kind of robust critique Luther Lebelo offered in his assessment of Nelson Mandela International Day (An insult to Mandela, July 10).

His concerns are serious and should be considered by anyone rushing into "Mandela Day activities" without thinking through the nature and significance of the campaign.

Indeed, these are the very concerns which the Centre of Memory has confronted in its own assessment of the first three years of the campaign.

For if the campaign were to be become simply a "playing to the gallery", a frenzy of "cosmetic charity activities", a do-gooding exercise aimed at maintaining the status quo, then it would be both a waste of time and an insult to Madiba.

In our view, however, the assessment by the ANC Liliesleaf Farm branch chairman is flawed.

Firstly, Lebelo fails to acknowledge the centre's strong warnings to people not to fall into the very traps identified by him. The campaign's central message is "make every day a Mandela Day". In other words, it is calling not for single, once-off acts of charity, but for commitment to social justice and for cultures of service to those in need.

Secondly, Lebelo ignores one of the primary values of Mandela Day work, namely, its capacity to inspire those who are privileged to confront the desperate plight of society's have-nots. South Africa, as Lebelo reminds us, is one of the most unequal societies on Earth, such interventions are critical.

We need all means available to address a form of alienation that is posing a fundamental challenge to the post-apartheid project.

Moreover, the campaign seeks to inspire systemically disadvantaged communities to take the steps needed to influence their own destinies.

Thirdly, what Lebelo offers as an alternative to the present campaign is at best disappointing. There is a place for marches and other forms of demonstration. There is nothing in the campaign that prevents communities, organisations and individuals from using such means in Mandela Day activations.

But, as the Occupy Wall Street campaign (launched by protesters concerned about inequality and greed in the US and across the globe) has discovered, sustained resistance has to be motivated by a coherent vision and attainable goals. It must provide solutions to problems rather than wallowing in them.

Fourthly, Lebelo seems to deny Madiba all agency in the conceptualisation and establishment of the campaign. The Centre of Memory has considerable archival evidence to the contrary.

Lebelo calls us the "so-called Mandela Foundation", suggesting a fundamental schism between the organisation and the man.

Again, he would do well to factor in archival evidence - Madiba founded the organisation in 1999 as his post-presidential office, launched the Centre of Memory as its core work in 2004, initiated thinking about Mandela Day with his 2008 London speeches and personally endorsed the campaign in 2009.

Finally, underpinning Lebelo's critique is a profound discomfort with aspects of Madiba's life, work and legacy.

We might hold most dear the Madiba who led an armed struggle, who faced down the death penalty and who spent nearly three decades in prison. But we must also reckon with the Madiba who prioritised reconciliation, presided over a government of national unity, constantly sought solutions to seemingly intractable problems and who both founded and gave his name to many charitable causes.

Madiba's legacy is rich and complex. The Nelson Mandela International Day campaign is committed to embracing it in all its richness and complexity. Anything less would be insulting.