The best or worst of times coming for our democracy 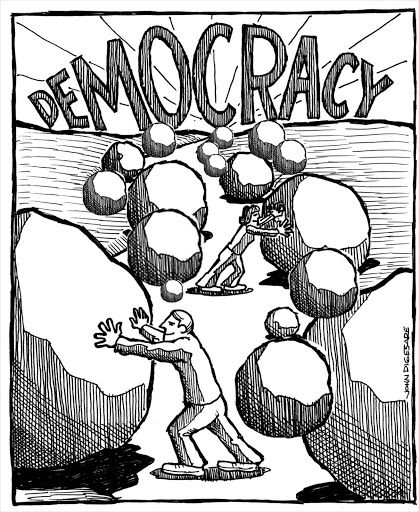 BIDDING farewell to one year to welcome another inescapably touches the inhabitants of planet earth with some gratitude for having made it.

The thrill is like crossing a bridge over doomed waters. Makes one wonder what it is like on other planets - but charitable attention would rather have us focusing where we live.

Others, inexplicably, resort to madness that unleashes pain, loss, destruction, tears and death. Yet others calmly note the passing of each year in quiet meditation and sincerely wish for the world to be more sober, safer, democratic and kinder to children.

Not only is the new year a sign of growing older but also of changing one's ways to be wiser.

Each year signifies that change is a permanent feature of life. Nothing is immutable. Change, though, carries the dangerous possibility of things turning out for better or worse.

Globally, possibilities can be as distressingly complex as superpowers ganging up against an errant state to bomb out a deranged leader in the name of defending citizens.

For newlywed couples the possibility for the worse might not simply end in divorce. It is no longer rare for one to kill the other as the only way to bail out of the vows taken. Shrien Dewani is currently fighting an extradition to South Africa for allegedly hiring a hitman to murder his wife Anni within eight days of marriage.

Continued failure by ordinary people to find protection against native and imperially greedy interests endlessly scavenging on hard-earned incomes, gradually reduces the moral significance of government down to zero as is often done by revellers bidding farewell to a passing year.

Left to its own devices a heartless political system resumes its old habits of disregarding the aggrieved.

Cosatu's Zwelinzima Vavi might scream, petition and march against the faulty notion of placing public roads in the hands of private interest to install toll-gates as they please.

The inclination of the government siding with the profiteering toll-road venturists remains a distinct possibility. Whether toll-gates finally win or lose the day, will be a defining feature of whether or not our democracy is destined for the best or worst of times.

Those who care less, often confuse the honour of political office as their time to eat. To rescue our world from the clutches of greed requires a purpose-driven force that can decisively tilt the scales against the ways of the corrupt in favour of the honest. Between the honest and corrupt, the ANC would be silly not to know which side to take.

Fighting corruption means eroding an entrenched well-oiled worldwide system where some members of our acclaimed civilisation would stop at nothing to kill others in order to prosper. Peace, in such a civilisation, remains gravely absent. The year 2012 is not only a cause for the ANC to celebrate 100 years but also a test for capability of whether or not it still possesses the magic to change our world.