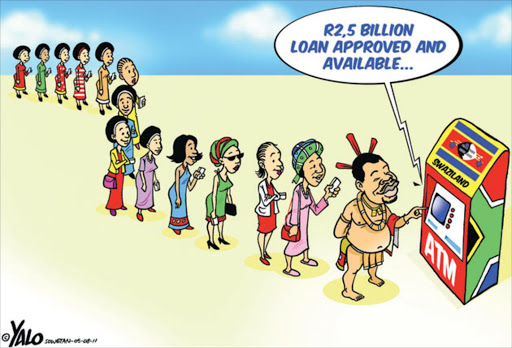 SWAZILAND has secured the much talked about R2,4billion loan. While some economists say it is in South Africa's interest to proffer the loan, Swaziland's opposition and NGOs are crying foul.

Those who are for the loan argue, among other things, that an economic meltdown in the tiny kingdom will spill over into South Africa.

The argument is also being made that it is not the government or king who are suffering, but civil servants, businesses, citizens and the poor.

But the dissenting voices are also amplifying their voices by invoking South Africa's own struggles against oppression.

In the eyes of many, South Africa has sold out and provided the last absolute monarch with a new lease and space to manoeuvre.

In their minds, this loan is only going to benefit an unpopular king and strengthen this fallacy of a democracy.

What they are advocating is for South Africa to allow Swaziland to reach the precipice, thereby forcing radical reform in the kingdom.

The South African government's assertion that Swaziland is not being given a blank cheque to do as it pleases but that there are stringent conditions to the loan and that it will be repaid in instalments through a debit order to the Southern Africa Customs Union, is of little comfort to the opposition and its partners in civil society.

The turmoil in the economic and political spaces of our neighbours is forcing South Africa to confront an unavoidable moral dilemma.

As a country whose history is littered with the suppression of human rights and the brutal murder of activists and innocent citizens, do we have the moral duty to isolate undemocratic states and their leaders even if it would sour relations and lead to a burden on our already stretched resources?

It is true that a meltdown in Swaziland cannot do South Africa a lot of good, as evidenced in the collapse of Zimbabwe.

Yes, Zimbabwean ministers would have us believe that life in Zimbabwe could not be better, but ask the millions of Zimbabweans who risk life and limb crossing treacherous wild life-infested terrain in search of a better life in Mzansi.

The question that post- apartheid South Africa should confront is whether it is right to put immediate economic concerns over the quest for a just and peaceful world.

Most of our current and former government leaders have made incalculable sacrifices in the struggle for liberation.

But they did not win this fight alone. If the international world did not eventually put a tight squeeze on the apartheid government's coffers, then the fight against this injustice would have been far more arduous than it already was.

As it turned out, many superpowers and businesses continued to do business with apartheid South Africa, and thus inadvertently strengthened these enemies of democracy and prolonged the suffering of many.

If every country had acted on its own immediate concerns instead of isolating a rogue state, then apartheid as a policy would have continued for much longer.

There are examples of countries that claim to be democracies yet support dictators, but because of its bloodied history, South Africa should not be one of them.

By lending Swaziland money, South Africa has clearly communicated that economic imperatives and bread and butter issues are trumping our supposed commitment to human rights and democratic reform.

Yet history has shown that economics and human rights are inextricably linked.

An unjust political system where plundering of resources is allowed inevitably compromises human rights and the country's ability to feed its people.

South Africa argues that it is motivated by a desire to prevent the collapse of Swaziland for the sake of its people.

My guess is that this loan is just a palliative that will soothe the symptoms of the disease.

By turning their backs on apartheid South Africa, some countries helped us to taste the freedom that we enjoy today. We dare not forget that.