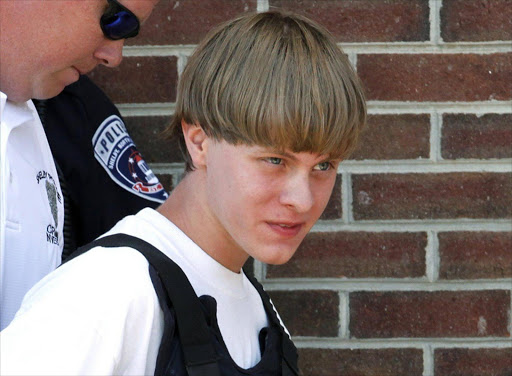 A chilling website apparently created by Dylann Roof emerged Saturday in which the accused Charleston church shooter rails against African Americans and appears in photographs with guns and burning the US flag.

It came to light as a mournful vigil Friday for the nine black worshippers killed at Emanuel African Methodist Episcopal Church gave way to anger and protests in Charleston and the state capital Columbia.

The church, one of the most historic African-American places of worship, meanwhile reopened, three days after a bloodbath that fueled simmering racial tensions in the United States and reignited impassioned calls for gun-control laws.

A rambling 2,500-word manifesto on the website, laced with racist lingo and spelling errors, does not bear the 21-year-old suspected white supremacist’s name.

But its first-person style, its title — “Last Rhodesian” — and references to Charleston and apartheid South Africa suggested he was its author. There were also photos of Roof on the site.

Roof, who went on the run after Wednesday’s shooting, was caught a day later in neighboring North Carolina and is in solitary confinement in jail charged with nine counts of murder.

The FBI said it was “taking steps to verify the authenticity” of the website.

Somber mourning turned to anger Saturday, with a rally at the state legislature in Columbia, where the Confederate flag has been a focal point for controversy for years.

Unlike US and state flags, it was not lowered to half-staff after the killings — because, officials say, doing so by South Carolina law requires approval from the state legislature.

While some whites consider the Civil War-era flag an emblem of Southern regional pride and heritage, others — black and white — see it as a sinister symbol of white supremacy and racism.

Several politicians, including US President Barack Obama, weighed in on the controversy Saturday.  Former Republican White House hopeful Mitt Romney posted on Twitter: “it’s time to take down flag in SC.” In response, Obama tweeted: “Good point, Mitt,” with a link to Romney’s comment.  Obama, who said after the Charleston shooting the United States should closely examine its gun laws, also recalled firearms deaths statistics on Twitter Saturday.  “Here are the stats: Per population, we kill each other with guns at a rate 297x more than Japan, 49x more than France, 33x more than Israel,” Obama tweeted.    Roof’s alleged online manifesto painted a chilling portrait of an angry young man.  “I have no choice. I am not in the position to, alone, go into the ghetto and fight,” the purported manifesto stated.

“I chose Charleston because it is most historic city in my state, and at one time had the highest ratio of blacks to Whites in the country.

“We have no skinheads, no real KKK, no one doing anything but talking on the Internet. Well someone has to have the bravery to take it to the real world, and I guess that has to be me.” Downloadable files on the website contain several haunting photos of Roof, who hails from a small village outside Columbia, more than two hours by car from Charleston.

In one, he is seen in a garden, holding a Confederate flag and handgun, wearing aviator-style sunglasses and oddly surrounded by potted flowers.

Two others depict Roof in a bedroom — one with a Confederate flag, the other pointing a handgun at the camera.

Some photos show him wearing garments with the flags of Rhodesia, as Zimbabwe was called under white rule, and apartheid-era South Africa.

Later, thousands — both white and black — gathered for a twilight vigil at a college basketball arena, singing the civil rights anthem “We Shall Overcome” and vowing not to let the bloodbath divide Charleston, the one-time American capital of the transatlantic slave trade.

A prayer service was scheduled to take place at Emanuel African Methodist Episcopal Church Sunday, where a large crowd gathered late Saturday at a makeshift memorial.

The shooting was the worst attack on a US place of worship in decades and comes at a time of revived racial tensions in many parts of the nation.

In San Francisco, Democratic presidential hopeful Hillary Clinton called for tougher gun laws in the United States in the wake of the tragedy.

“Race remains a deep fault line in America. Millions of people of color still experience racism in their everyday lives,” she said.

Authorities are treating the shooting as a hate crime and investigating it as possible “domestic terrorism.” His arrest warrant revealed how he allegedly shot the six women and three men, aged 26 through 87, multiple times with a high-caliber handgun and then stood over a survivor to make a “racially inflammatory” statement.