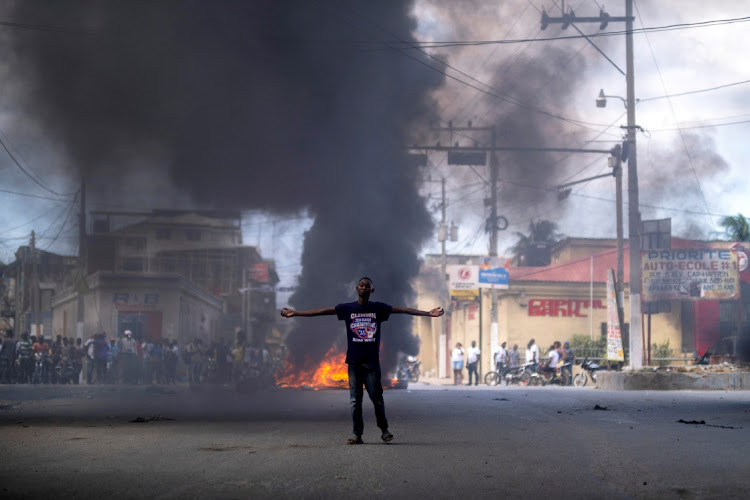 A man stands in front of a burning barricade on street filled with smoke from burning tires during a protest against the assassination of Haitian President Jovenel Moise in Cap-Haitien, Haiti July 22, 2021.
Image: REUTERS/Ricardo Arduengo

Protests by angry supporters of late Haitian President Jovenel Moise convulsed the slain leader's hometown for a second successive day as workers laboured into the night to finish a makeshift auditorium in time for his funeral on Friday.

Moise was gunned down in his home in Port-au-Prince earlier this month, setting off a political crisis in the Caribbean country already struggling with poverty and lawlessness.

Wielding hammers, pickaxes and shovels, labourers scrambled to set up stages, lights and pave a brick road to Moise's mausoleum on a dusty plot of several acres enclosed by high walls in the northern city of Cap-Haitien.

Elsewhere in the city, protesters set tires on fire to block roads on Thursday afternoon.

Built on land held by Moise's family where he lived as a boy, the partly built tomb stood in the shade of fruit trees, just a few steps from a mausoleum for Moise's father, who died last year.

Foreign dignitaries are flying to Cap-Haitien from around the Americas to pay their respects to Moise, joining mourners who have taken part in a string of commemorations in Haiti this week.

A former banana exporter, Moise failed to quell gang violence that surged under his watch and faced waves of street protests over corruption allegations and his management of the economy.

Demonstrators in Cap-Haitien vented anger over the many questions that remain unanswered over the July 7 assassination of Moise, which the government said was carried out by a team of largely Colombian mercenaries.

Banners celebrating Moise festooned buildings along the narrow streets in Cap-Haitien's old town with proclamations in Creole including, “they killed the body, but the dream will never die,” and “Jovenel Moise — defender of the poor.”

Haiti's government on Tuesday formally appointed Ariel Henry as prime minister, nearly two weeks after President Jovenel Moise was gunned down in a ...
News
5 months ago

One of the Haitian American men arrested on suspicion of taking part in the assassination of Haiti's president last week had a prior relationship ...
News
6 months ago

Haitian police said on Sunday they had arrested one of the suspected masterminds in the assassination of President Jovenel Moise, a Haitian man whom ...
News
6 months ago
Next Article