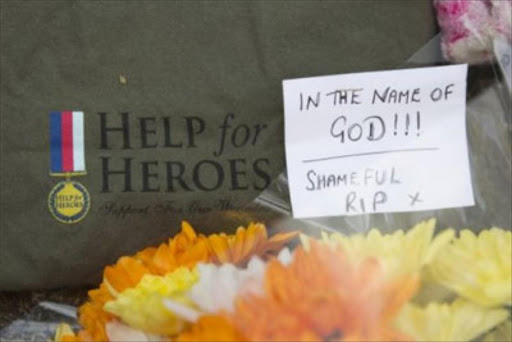 British police made two further arrests and raided houses across London following the brutal murder of a serving soldier who survived a tour of duty in Afghanistan.

Prime Minister David Cameron appealed for calm after 25-year-old Lee Rigby was butchered outside a London army barracks on Wednesday, while an extra 1,200 officers were deployed on the capital's streets in a bid to reassure the public.

The intelligence agencies meanwhile came under scrutiny after it emerged that the two murder suspects, who were injured in police gunfire at the scene, had been known to the security services.

Both men, aged 28 and 22, are believed to be Britons of Nigerian origin. One of them had frequented meetings by the now-banned Islamist group Al-Muhajiroun, its UK leader Anjem Choudary told AFP.

The two chief suspects are under arrest in separate hospitals. They are both stable and their injuries are not life threatening, police said.

In a brazen mid-afternoon attack in Woolwich, southeast London, the pair apparently hacked Rigby with knives and a meat cleaver before attempting to explain their actions in an Islamist tirade to passers-by.

The victim, who has a two-year-old son Jake, was a machine gunner who served with NATO-led forces in Afghanistan in 2009, the defence ministry said.

Police searched five properties in London and one in a village in eastern England, and announced the arrests of a man and a woman, both aged 29, for conspiracy to murder.

"This is a large, complex and fast-moving investigation which continues to develop," a spokesman said.

Detectives are sifting through witness statements, social media and security camera footage, while forensic experts have been combing the scene in Woolwich for evidence.

Cameron has condemned the "barbaric" attack and said it was likely terrorist-related, while experts said the murder had the hallmarks of a militant Islamist attack.

Media reports citing witnesses said the men first ran over their victim in a car before finishing him off with the knives.

A government source said "we will be looking into the possibility that they were known" to the security services.

British media are naming one of the suspects as Michael Adebolajo, a 28-year-old Londoner.

Islamist preacher Choudary told AFP Adebolajo was from a Nigerian family, converted to Islam in 2003 and took the name "Mujahid". He regularly attended sermons by banned Islamist preacher Omar Bakri, the Al-Muhajiroun founder.

"He used to attend some of our activities over the years. Very peaceful chap actually, not violent at all," Choudary said, adding that he lost contact three years ago.

Chilling onlooker footage showed the man thought to be Adebolajo still holding his weapons and saying they killed Rigby "because Muslims are dying daily by British soldiers".

Cameron condemned the attack as a "betrayal of Islam".

Speaking after chairing a second meeting of COBRA, the government's emergency response committee, the prime minister branded the murderers "sickening".

"This was not just an attack on Britain and on the British way of life. It was also a betrayal of Islam and of the Muslim communities who give so much to our country," he said outside his Downing Street office.

He added: "We will never give in to terror -- or terrorism -- in any of its forms... This view is shared by every community in our country."

The murder is the first deadly Islamist attack in Britain since 2005, when suicide bombers killed 52 people on London's transport network.

In the video, which has gone viral on the Internet, Adebolajo demanded Cameron's government "bring our troops back".

"You people will never be safe. Remove your governments, they don't care about you," he said.

Rigby was wearing a top bearing the logo of Help for Heroes, a charity which supports wounded troops. Its website crashed thanks to the thousands of people wishing to offer their support, it said.

Flowers have been laid outside the barracks, which was the venue for shooting events at the London 2012 Olympics, while security was tightened at other military sites across the city.

The extra police officers on the city's streets were concentrating on religious venues and transport hubs.

A female scout leader who confronted the assailants shortly after the attack said she told them: "It is only you versus many people. You are going to lose."

The Muslim Council of Britain has described the murder as "a truly barbaric act that has no basis in Islam".

US President Barack Obama condemned the killing as "appalling" and "horrific", saying there was "absolutely no justification for such acts".