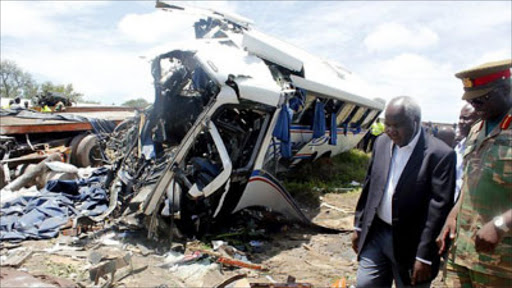 A South African farm manager is suspected of causing an accident where 53 people died near Lusaka, Zambia.

The vehicle, supposedly belonging to the South African, tried to overtake the bus and collided with the oncoming truck.

"He [the man] is believed to be South African. He is receiving treatment at the moment so we have not charged him yet," Kangela said.

Fifty-three people were killed in a high-speed collision between a bus and a truck in Zambia, the government said, one of the country's worst-ever traffic accidents.

The bus carrying 73 passengers hurtled into an oncoming truck, leaving bloodied bodies and wreckage on a main road north of Lusaka.

"I can confirm that 53 people have died in the accident," Harry Kalaba, an official in the vice president's office, told AFP from the crash site 100 kilometres (60 miles) north of the capital.

There was serious speeding by all the vehicles involved, Kalaba said.

The Zambia Postal Service bus -- which also runs passenger transport services -- had been taking passengers from the Copperbelt mining province to Lusaka.

While closing in on its final destination the bus had been trying to swerve to avoid another oncoming vehicle, survivor Ackim Shawa told AFP from his hospital bed.

Fifty-one people on the bus died, while the truck driver and his assistant were also killed.

Pictures from the scene show bloodied and lifeless bodies lying next to the mangled wreckage of the vehicles.

Some 22 survivors were being treated in a nearby missionary hospital, where they lay crying, dazed or unconscious.

Some had cuts and bruises, but survivors with serious injuries were taken to Lusaka.

Bystanders gathered on the edge of maize fields surrounding the crash site while the blood-soaked road was cleared of bodies.

President Michael Sata conveyed his government's "deepest condolences to the beloved families on the death of their beloved ones" and wished the injured a speedy recovery.

Around 1,200 people are killed on the country's roads every year, according to official data.

In 2005, 44 schoolchildren were killed in a bus accident while travelling to school holidays from the northern Luapula province to Lusaka.