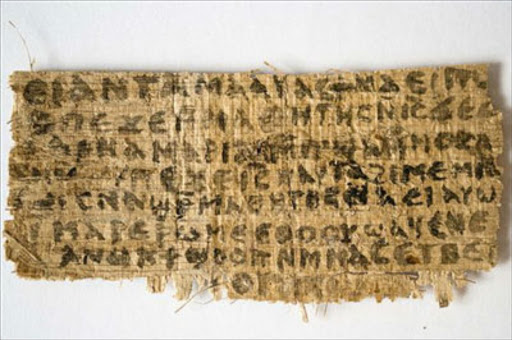 Is a scrap of papyrus suggesting that Jesus had a wife authentic?

Scholars questioned the much-publicized discovery by a Harvard scholar that a 4th century fragment of papyrus provided the first evidence that some early Christians believed Jesus was married.

And experts in the illicit antiquities trade also wondered about the motive of the fragment's anonymous owner, noting that the document's value has likely increased amid the publicity of the still-unproven find.

Karen King, a professor of early Christianity at Harvard Divinity School, announced the finding Tuesday at an international congress on Coptic studies in Rome. The text, written in Coptic and probably translated from a 2nd century Greek text, contains a dialogue in which Jesus refers to "my wife," whom he identifies as Mary.

King's paper, and the front-page attention it received in some U.S. newspapers that got advance word about it, was a hot topic of conversation Wednesday during coffee breaks at the conference.

Christian tradition has long held that Jesus was unmarried, although there is no reliable historical evidence to support that. Any evidence pointing to whether Jesus was married or had a female disciple could have ripple effects in current debates over the role of women in the church.

Stephen Emmel, a professor of Coptology at the University of Muenster who was on the international advisory panel that reviewed the 2006 discovery of the Gospel of Judas, said the text accurately quotes Jesus as saying "my wife." But he questioned whether the document was authentic.

"There's something about this fragment in its appearance and also in the grammar of the Coptic that strikes me as being not completely convincing somehow," he said in an interview on the sidelines of the conference.

Another participant at the congress, Alin Suciu, a papyrologist at the University of Hamburg, was more blunt.

"I would say it's a forgery. The script doesn't look authentic" when compared to other samples of Coptic papyrus script dated to the 4th century, he said.

King acknowledged Wednesday that questions remain about the fragment, and she welcomed the feedback from her colleagues. She said she planned to subject the fragment to ink tests to determine if the chemical components match those used in antiquity.

"We still have some work to do, testing the ink and so on and so forth, but what is exciting about this fragment is that it's the first case we have of Christians claiming that Jesus had a wife," she said.

She stressed that the text doesn't provide any historical evidence that Jesus was actually married, only that some two centuries after he died, some early Christians believed he had a wife.

Wolf-Peter Funk, a noted Coptic linguist, said there was no way to evaluate the significance of the fragment because it has no context. It's a partial text and tiny, measuring 4 centimeters by 8 centimeters (1.5 inches by 3 inches), about the size of a small cellphone.

"There are thousands of scraps of papyrus where you find crazy things," said Funk, co-director of a project editing the Nag Hammadi Coptic library at Laval University in Quebec. "It can be anything."

He, too, doubted the authenticity, saying the form of the fragment was "suspicious."

Ancient papyrus fragments have been frequently cut up by unscrupulous dealers seeking to make more money.

An anonymous collector brought King the fragment in December 2011, seeking her help in translating and understanding it. In March, she brought it to two papyrologists who determined it was very likely authentic.

On Tuesday, Harvard Divinity School announced the finding to great fanfare and said King's paper would be published in January's Harvard Theological Review. Harvard said the fragment most likely came from Egypt, and that its earliest documentation is from the early 1980s indicating that a now-deceased professor in Germany thought it evidence of a possible marriage of Jesus.

Some archaeologists were quick to question Harvard's ethics, noting that the fragment has no known provenance, or history of where it's been, and that its owner may have a financial interest in the publicity being generated about it.

King has said the owner wants to sell his collection to Harvard.

"There are all sorts of really dodgy things about this," said David Gill, professor of archaeological heritage at University Campus Suffolk and author of the Looting Matters blog, which closely follows the illicit trade in antiquities. "This looks to me as if any sensible, responsible academic would keep their distance from it."

He cited the ongoing debate in academia over publishing articles about possibly dubiously obtained antiquities, thus potentially fueling the illicit market. He questioned, for example, whether the letter from the German Egyptologist was authentic, and whether Harvard should have contacted Egyptian authorities about the find.