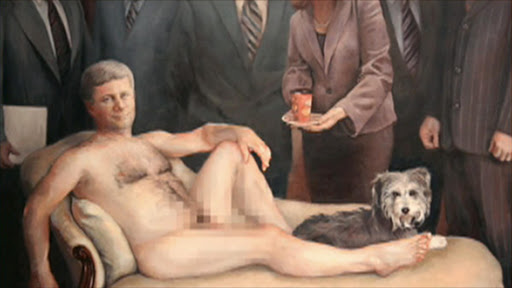 Zuma is not alone: Another country is hot under the collar about an artist's impression of their prime minister - and here's some other politicians who have been depicted without clothing

"Emperor Haute Couture" shows the prime minister reclining on a chaise lounge wearing 'nothing but a subtle smile'. He is surrounded by people in suits, whose faces can't be seen. A dog rests at his feet as a woman in business attire offers him a cup on a silver platter.

The painting was put on display at a public library as part of an art competition that runs until the end of the month.

The painting is described as a figurative piece that has a serious message about Harper not living up to his promises.

Other political leaders to be depicted nude in the past include America's Barack Obama and Hillary Clinton. There are no doubt many more ..

Meanwhile, back home, Cosatu placards recently also called for DA leader Helen Zille to be "stripped naked" - and now such an image has emerged on social media platforms. It appears to be an unflattering, photo-shopped, image of a wrinkled naked body with her face superimposed on it.

Zille has expressed amusement over it.

She told the Star newspaper: “Now you can see why I try to cycle vigorously for an hour every day. I obviously need more than Botox”.

A person with the Facebook name William ANCYL posted the picture and has refused demands to take it down. He said the picture was revenge for Brett Murray’s painting “The Spear”.