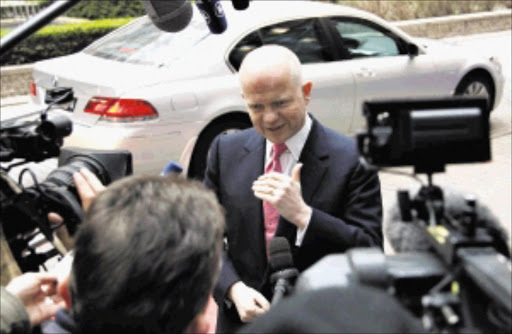 BRUSSELS - Britain is assessing whether to evacuate its citizens in Libya, foreign secretary William Hague said yesterday and called on Libyan authorities to protect human rights and basic freedoms.

"The credibility of the Libyan government in these matters has been undermined so far by the failure to protect their own people and to respond to the legitimate grievances of the people," Hague told reporters when he arrived for a meeting of European Union foreign ministers to discuss the situation.

"We want to see proper protection for foreign nationals in Libya and in particular assistance for them as they are trying to leave the country... Those who are able to leave safely should leave by commercial means. That situation is constantly under review. We will assess the needs for evacuations as things progress," he said.

The son of Libya's leader, Muammar Gaddafi, warned yesterday: "Libya faces civil" war and "rivers of blood". This, as a brutal crackdown failed to stop an unprecedented popular uprising from reaching the capital.

With gunfire crackling in the streets of Tripoli, and Human Rights Watch putting the death toll at 233 since Thursday, Saif al-Islam Gaddafi vaguely promised reforms as he condemned the revolt as a foreign plot.

"Libya is at a crossroads. If we do not agree today on reforms ... rivers of blood will run through Libya," he said in a fiery but rambling televised speech that betrayed a note of desperation within his father's 41-year regime.

"We will take up arms ... we will fight to the last bullet. We will destroy seditious elements. If everybody is armed, it is civil war, we will kill each other... Libya is not Egypt, it is not Tunisia." The elder and famously mercurial Gaddafi, 68, the longest-serving leader in the Arab world, remained out of sight.

Heavy gunfire broke out in central Tripoli and several city areas yesterday for the first time since the uprising began in eastern Libya, witnesses and an AFP journalist reported.

"We can hear gunfire outside. It hasn't stopped all day," the resident of a suburb east of Tripoli told AFP in Cairo by telephone.

"When we heard the unrest was approaching, we stocked up on flour and tomatoes. It's definitely the end of the regime. This has never happened in Libya before. We are praying that it ends quickly."

"Our neighbour was killed last night," added another Tripoli resident in the centre of the capital. "There is a lot of shooting outside. No one from our family has gone to work today."

Several witnesses said fire had been set to public buildings overnight, including the state broadcasting offices and branches of the People's Committees that are the mainstay of the regime.

There were clashes in Tripoli's downtown Green Square between protesters and Gaddafi supporters, and a resident of the working-class Gurgi area said security forces had fired tear gas at protesters.

"We are hearing anti-regime slogans and firing," he told AFP by telephone overnight Sunday. "Our house is filled with tear gas."

Prime minister Baghdadi Mahmudi told EU ambassadors in Tripoli on Sunday there were "very precise plans, destructive and terrorist, that want Libya to become a base for terrorism."

In Cairo, Libya's envoy to the Arab League said he had resigned to "join the revolution." Tripoli's ambassador to Delhi also quit, as did a diplomat in Beijing who said Gaddafi may have left the country, Al-Jazeera television reported.