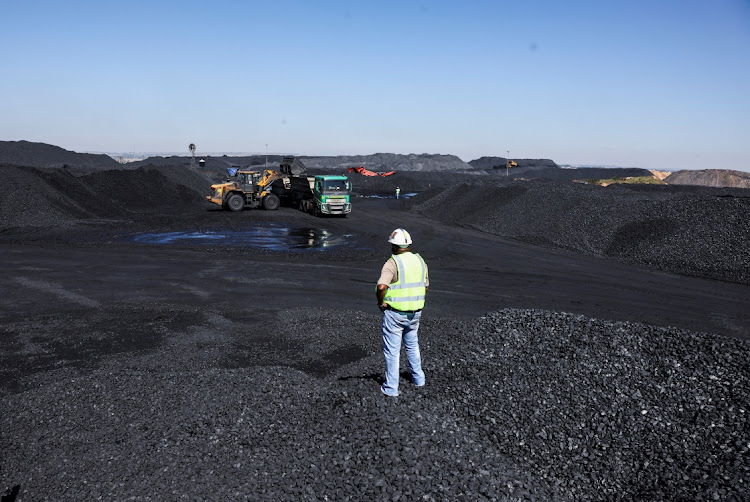 A worker looks on as an excavator loads coal onto a truck at Canyon Coal's Khanye colliery near Bronkhorstspruit, around 90 kilometres north-east of Johannesburg on April 26, 2022.
Image: REUTERS/Siphiwe Sibeko

Mining companies in SA have resorted to trucking coal to ports to meet a surge in European demand since the war in Ukraine started, bypassing the deteriorating rail infrastructure they blame for billions of dollars in lost revenue.

In April, Transnet declared force majeure on contracts with producers but with coal prices near record highs, mining firms including Glencore have turned to trucks, one industry source said. A Glencore spokesperson declined to comment.

Trucking coal costs about four times more than rail, according to miner Menar. It has started using trucks but said the high coal prices mean miners can absorb the cost, for now.

“The industry at large are on their knees, so they are resorting to drastic measures,” said Clifford Hallatt, chief operating officer at Canyon Coal, a joint venture between Menar and commodity trader Mercuria.

At Canyon Coal's Khanye Colliery some 90km (55 miles) from Johannesburg, it takes about 80 trucks - each carrying 34 tonnes - to replace one average Transnet train, making it unsustainable financially, boosting emissions and clogging roads.

But the company says it has little choice.

A year ago, it was loading five or six Transnet trains a week from Khanye. That has dropped to just two or three now, and its stockpiles of coal have been mounting, Hallatt said. 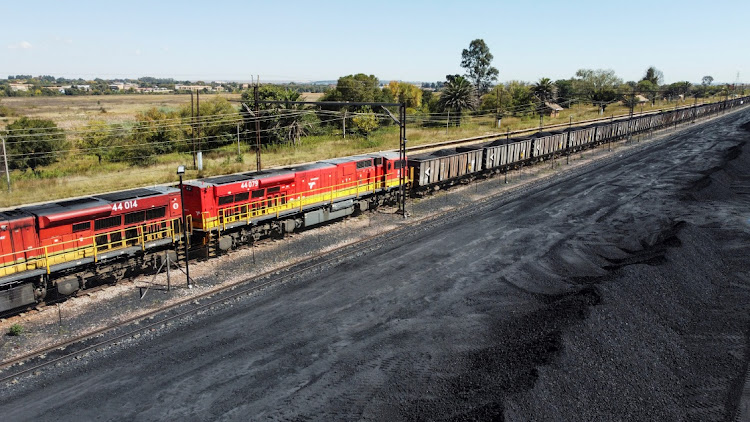 A transient freight rail train is seen next to tons of coal mined from the nearby Khanye Colliery mine, at the Bronkhorstspruit station, in Bronkhorstspruit on April 26, 2022.
Image: REUTERS/Siphiwe Sibeko

Demand, meanwhile, has shot up since the war in Ukraine. The European Union has announced a ban on Russian coal and mining companies in SA say they are fielding calls from European countries looking for imports.

As for prices, Australian thermal coal futures were trading at about $80 a tonne at the start of 2021. A week after Russia sent its forces into Ukraine, they rocketed to a record high of $440 and are now trading at $326 a tonne.

As a whole, SA coal miners are putting about 400 trucks on the road a day, trucking some 6 million tonnes of coal on an annualised basis, according to the industry source.

“We are aware that there's been an increase in the number of coal trucks now running into the ports and that's not a good situation,” Transnet Freight Rail Chief Executive Sizakele Mzimela told Reuters.

Transnet shipped 58.3 million tonnes of coal to the Richards Bay Coal Terminal last year, 24% below its annual capacity of 77 million tonnes. Transnet expects an improvement in the delivery of coal this year, to about 60 million tonnes.

“The frustration is more about the lost opportunity, because of course if we were able to move more, we would benefit, they would benefit. We are tied at the hip,” she said.

Mzimela said Transnet was open to miners investing in their own rolling stock, as well as allowing private rail operators to run on some container route slots. But it does not plan to open its iron ore and coal lines to private firms.

That falls short of what mining firms, who are helping to fund private security to combat theft along rail lines, want.

Menar said it was pushing to invest in state-owned rail lines and procure its own locomotives and wagons as part of attempts to overcome the country's infrastructure bottleneck.

Since the security collaboration started, the number of drones monitoring the coal line from Mpumalanga to Richards Bay has more than doubled and incidents have fallen to about 19 a week from 35 previously, according to Transnet.

The copper cables carrying electricity from substations along the line to signalling systems are regularly stolen, for example, as well as other metal parts along the track.

For the first time, SA was ranked among the 10 least attractive jurisdictions for mining investment in the Fraser Institute's annual mining industry survey last year.

Gabrielle Reid, associate director for strategic intelligence at S-RM, said the logistical challenges were now prompting some SA miners to look outside the country for growth opportunities.

“Our most recent experiences with rail in SA make for a compelling diversification case,” July Ndlovu, chief executive of thermal coal producer Thungela Resources, told analysts on a call in March.

“Given the concentration that we've got in a single geography and the concentrated risk associated with that infrastructure, I think it stands to reason that we should look at other opportunities.”

Chairperson of the state capture commission chief justice Raymond Zondo says the National Treasury would have suffered irreparable damage had it not ...
News
3 weeks ago

As South Africans pour over the fourth instalment of the state capture report, here is a reminder of what was mentioned, and those implicated, in the ...
News
3 weeks ago

Disruption to the supply of jet fuel to OR Tambo International Airport in Johannesburg, due mainly to flood damage to railway infrastructure in ...
News
4 weeks ago
Next Article