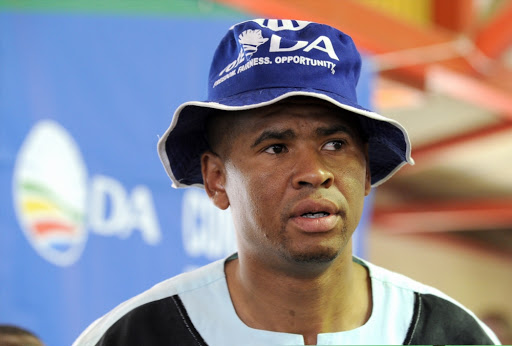 Former ANC councillor and “poo thrower in chief” Loyiso Nkohla is making a political comeback and wants Capetonians to vote him back into the Cape Town city council as a candidate for the Patriotic Alliance (PA).

He joined the party earlier this month and is standing as its councillor candidate in four Cape Town wards.

Nkohla insisted this week that not being in the media spotlight did not mean he had stopped helping informal settlement dwellers get better service from the city.

As evidence, Nkohla produced an e-mail he sent to the city manager and other senior councillors this month in which he complained about “inhabitable” conditions in Khayelitsha and threatening to take action if the concerns were not addressed.

He highlighted potholes and overflowing drains which has seen human waste spilling into the streets.

I had to drive from Table View to fight for the people of Khayelitsha, where sewerage is running down the streets while local ANC councillors remain quiet.

Nkohla warned the city bosses not to disappoint, otherwise “they will see”.

“They responded because that is the only language the city of Cape Town understands,” he said.

“I had to drive from Table View to fight for the people of Khayelitsha, where sewage is running down the streets while local ANC councillors remain quiet. It took me writing a letter to the city manager and telling them if they don't sort it out, I will mobilise to the city centre,” he said.

His phone has more messages from community members who were either requesting his intervention in their service delivery issues or are thanking him for intervening. He claimed some of these are members of other political parties.

Nkohla rose to national prominence around 2010 when he led the unconventional poo protests, transporting portable toilets from informal settlements and dumping their contents in key landmarks about the city, including Cape Town International Airport.

At the time, he claimed they did this to highlight poor sanitation in informal settlements while Cape Town enjoyed rave reviews as a world class city. The ANC expelled him as a result of the protests.

Nkohla revealed that his original plan was to register the Ses'khona People's Rights Movement, the community organisation he led, as a political party to contest the municipal elections in Cape Town.

He later defected to the DA in 2016, where he was rewarded with a job at the City of Cape Town but left a few years later after falling out with the party's national leadership at the time.

This Friday, with the hearing of the second part of the court case on the state of school toilets in Limpopo (Rosina Komape and others vs Minister of ...
Opinion
2 months ago

The sewage crisis in Standerton, Mpumalanga, is causing tension between neighbours who are desperately trying to find a solution to the long standing ...
News
7 months ago

Nkohla then formed the Land Party to contest the national elections in 2019, which he also quit a few months after an unsuccessful electoral contest.

Nkohla said he had approached PA leader Gayton McKenzie to fund this dream but the businessman-cum-politician did not just decline his request for funding, he convinced him to join his party instead.

“I had told myself that this time I would do it with people from informal settlements, backyard dwellers and people who are affected by the issues we have been championing but unfortunately things did not go that way,” he said.

Nkohla claimed to have support in some of the poor coloured communities in the city. It was in this context that he and McKenzie found each other — to unite black and coloured people whose communities do not fully enjoy the city's riches.

“We want to have a seat at the table as black people united, whether you are coloured or African, we are all subjected to poverty, unemployment and affected the most by corruption and crime,” he said.

“I don't care that people say, 'Loyiso, you are changing political parties like you change underwear.' I go where my heart is.”

Nkohla said the only condition he gave to the PA leadership was for them to field some of the Ses'khona activists as ward candidates in Cape Town's informal settlements.

“I said give them a chance to showcase their strength, their ability and the confidence they enjoy in the communities. As a result, all our activists, the councillor candidates, are people who come from informal settlements,” he said.

In return, they will make sure the poor people benefit from the budgeting process “because that is where the power of a municipality lies, when it decides about the budget.”

The Cape Town nurse alleged to have kidnapped and forced her boyfriend's mistress to eat dog faeces will hear on Thursday whether her bail conditions ...
News
2 years ago

A Mpumalanga municipality that battles to supply its residents with water allegedly wants to spend R4.5m on an entertainment event.
News
2 years ago
Next Article