'Please bring us home', pleads a group of South Africans stuck in Turkey

A group of 29 South African musicians have found themselves stranded in Turkey with no prospects of returning home soon while food supplies decrease and accommodation insecurities slowly become a reality.

The group which was contracted by Rainbow Entertainment, a company that provides entertainment to hotels around Turkey, found themselves stranded after Covid-19 was declared a global pandemic in March.

They posted a video on social media pleading to be returned to South Africa as they were not coping.

Lundi Mlomyeni, who spoke to Sowetan on behalf of the group on Thursday said they were frustrated by the lack of assistance from the Department of International Relations and Cooperation (Dirco).

Dirco spokesperson, Lunga Ngqengelele had not responded to the questions about the group’s situation.

My young cousin, your brother and sister is stuck and stranded in a foreign country with no place to go. In desperate need for rescue @PresidencyZA @DIRCO_ZA #bringushome #strandedinturkey pic.twitter.com/1Zq3nz1lTk

“We understand that we cant come home because of global travel bans, but our company informed us that it was running out of funds to take care of us because it doesn't have a source of income as well due to everything being closed,” Mlonyeni said.

He said they all arrived in Turkey in March but not at the same time and that it was difficult for them to leave after  Covid-19 was declared a global pandemic.

“The company booked flights for us to leave but those flights were cancelled because of the pandemic and the shutdown this side was increasing. Some of the money that we were going to make was going back to the company so that it could take care of us in terms of providing us with accommodation and food,” he said.

He explained that their company informed them it intended on reducing their daily food allowance because it did not have a stream of income and that it was finding it hard to house them.

“We receive 75 Euros each, but they said they’re going to reduce that because they don't have money,” he said. 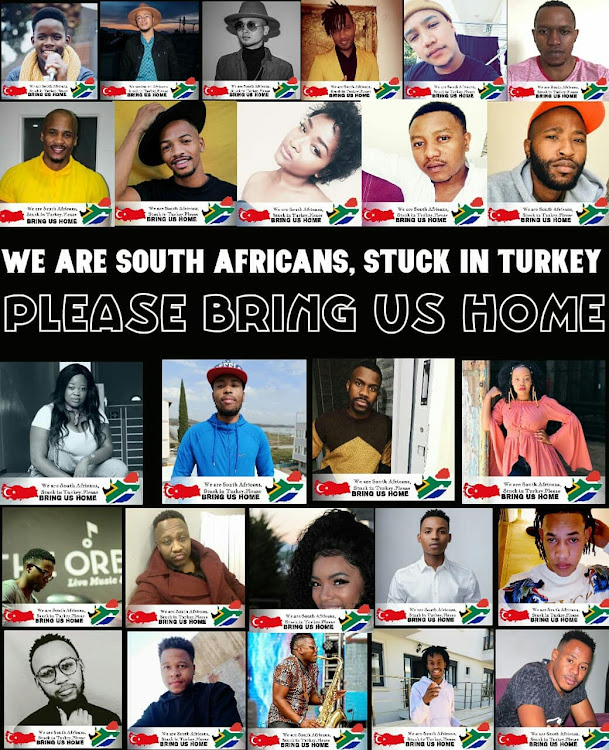 Mlonyeni said they have been appealing to the South African Embassy in Turkey to assist them with food or shelter until the situation stabilised.

“We wont be coming home anytime soon. That's a given, but we do need things to keep us afloat until a time when the travel ban is lifted,” he said.

Mloyeni said they have not been able to receive assistance from Dirco despite having been in contact for a few weeks.

“The Embassy has been telling us that they have been making efforts to try and help our situation but nothing has happened to date. We have been told to also email DIRCO with regards to requesting the process of repatriation and have been doing so however we have not received any response.

"It has been very difficult to remain patient as the spread of COVID-19 has become even worse than South Africa at this point and us being stranded raises a lot of fears together with the fact that we have run out of resources and essentials. The communication with the embassy at the moment has become problematic more than it has been of help; this stems from us not being happy with the assistance we have been receiving,” he said.