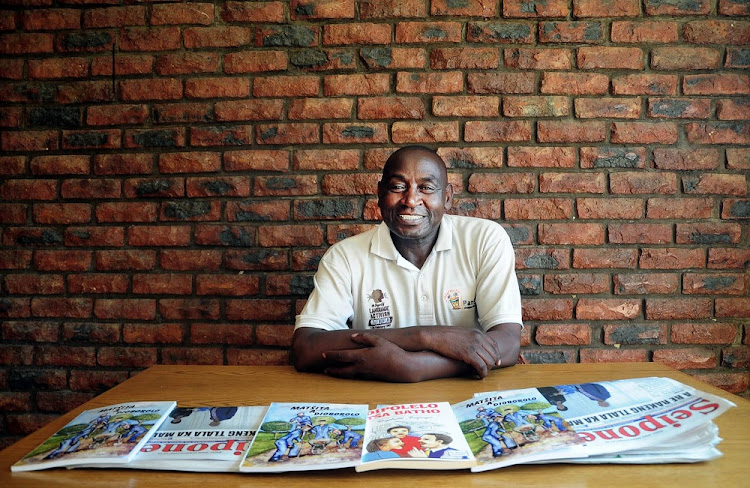 When Diphete Bopape realised how his mother who loved reading struggled with English newspapers he decided to start his own paper to ensure she and many others could enjoy reading in their own mother tongue.

The former school teacher and author of nine literary Pedi books is the founder and editor of the Pedi language newspaper Seipone (Mirror) in Polokwane, Limpopo.

During the last census in 2011, Statistics SA estimated the number of Pedi speakers in the country at 4.6-million - the fifth most spoken language in the country.

But because government and big corporates use English as the language of business, indigenous language publications like Seipone lose out on much of the advertising revenue required to keep any newspaper afloat.

But despite often agonising about raising enough funds for printing, distribution and paying staff and contributors, Bopape isn't about to give up because his dream is to ensure Sepedi doesn't die.

He also uses the newspaper as a platform to offer aspirant journalists an opportunity to hone their skills and garner experience. But its influence stretches beyond journalism.

"Teachers from various schools have indicated that they rely on Seipone to teach aspects such as spelling, comprehension, loud reading et cetera," Bopape says.

"As the only newspaper in this language, Seipone is used for oral examination and for drawing questions on various language aspects.

Mogoeng calls on state to invest in indigenous tongues

"In the absence of alternative sources, it is particularly the use of the newspaper as a teaching and learning tool that has made me to push the paper despite challenges."

The United Nations, Education and Scientific Council [Unesco] which observes February 21 as International Mother Language Day, says out of more than 6,700 languages spoken in the world today, 40% face extinction.

The alarming rate at which indigenous languages are diminishing has resulted in Unesco declaring 2022/2032 as the International Decade of Indigenous Languages.

Unesco says this is aimed at drawing attention to the loss of indigenous languages and what can urgently be done to promote and preserve them.

"While apartheid was such a cruel and vicious system while I was growing up, the system did have at least two publications in my language, Northern Sotho/Sepedi, namely Tswelopele (Progress) and Motswalle wa Bana or WAMBA (Children's Friend)," Bopape says. "While these publications were mainly used for propaganda purposes, besides the Bible, they offered something in my language that I could read with a measure of understanding and confidence."

But these publications ceased to exist with the demise of apartheid in the early 1990s and have not been replaced by anything.

"What this means is that, besides school texts that are meant for use in schools, the only publication that is available to speakers of my language is the Bible.

"The implication of this is that once they quit school, my people have nothing that they can read with comprehension for the rest of their lives.

"So people who do have a measure of reading and writing at school in their mother tongue are condemned to spending the rest of their lives without anything they can read with a measure of enjoyment.

"In the absence of [advertising revenue/advertorials etc], an indigenous language newspaper such as Seipone soon finds that it only has expenditure but no income.

"In the absence of adverts and advertorials, the newspaper simply does not have resources to sustain itself." - Mukurukuru Media