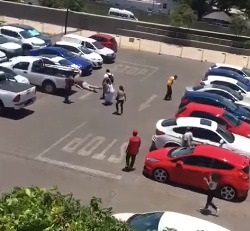 A man was shot dead after an alternation at Menlyn Maine shopping centre in Pretoria on Monday.
Image: Facebook/Intelligence Bureau

A 45-year-old man has been arrested following a fatal shooting at Menlyn Maine in Pretoria.

The incident occurred in broad daylight on Monday.

“It is alleged that the deceased was with two other men at Menlyn Maine when one of them approached the suspect, whereafter an altercation ensued,” said Peters.

A 45-year-old man from Mondeor, south of Johannesburg, has been arrested for perjury.
News
1 year ago

“Preliminary reports further indicate that the suspect retreated to his vehicle and returned with a firearm and fired more than one shot at the deceased, who was attempting to diffuse the situation.

"The man was declared dead on the scene."

Eye witness Siphokazi Bhengu took to Twitter to detail what she experienced. “I witnessed the Menlyn Maine shooting at close range. I am so shook. I don’t think I have [ever] cried so much,” she wrote.

Others expressed their fear at the sound of the gunshots.

Peters said police seized the firearm used by the suspect. The motive for the shooting is yet to be established.

The man is expected to appear soon in the Pretoria magistrate's court on a murder charge.

Two Westville police officers who were involved in a brazen daylight shoot-out with a gang of armed robbers in Durban on Thursday escaped unharmed.
News
1 year ago

One suspect was shot and killed and four were arrested during a shootout with police on the R21 highway on Wednesday morning.Gauteng police ...
News
1 year ago
Next Article