Vakhegula to show off their skills in France, Germany 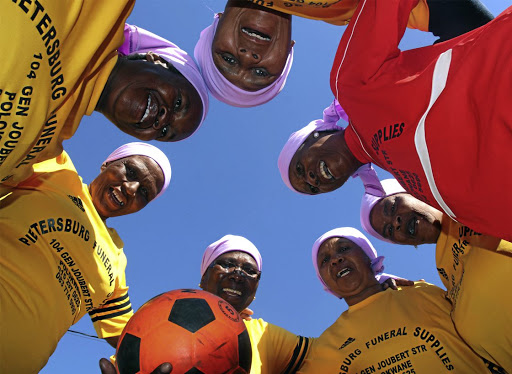 Vakhegula Vakhegula will fly out to France on Monday to play a friendly soccer match against a French team on June 18. They return to the country on June 24.
Image: Antonio Muchave

Grannies from a popular Limpopo soccer club will take some time off from their domestic chores as they travel to play against their counterparts in France in two weeks' time.

At least 25 elderly women who play for Vakhegula Vakhegula are set to leave the country on Monday.

A majority of them are from Limpopo, while others are from Mpumalanga, Western Cape and Gauteng. They will represent SA in a friendly match there.

The team has its roots at Nkowankowa township outside Tzaneen.

One of the players, Anna Vuma, 76, told Sowetan she was looking forward to representing the country. Vuma is also excited that she will use fork and knife when she eats for a good two weeks while in France.

"We are going to beat those grannies in France. Our team is stronger and we train twice a week. I have travelled to Russia, US and Japan before with other team members.

"We won those matches, hence I'm saying I'll enjoy the food there using fork and knife because it's a norm that when we travel we sleep in luxurious hotels," said Vuma.

She said two months ago, she hosted the French grannies' team delegation at her house in Nkowankowa.

The team's goalkeeper, Mamaila Chauke, 78, said she is going to make sure that nothing goes past her in the encounter which will take place on June 18.

Soccer gogos pull up their socks

"Since the planting season is over, I have been working hard at training. My defence [team members] know that I will shout at them if they are not tight at the back and allow opponents to do as they please.

"I'm optimistic that we are going to win this game, because our history speaks for itself," she said.

Chauke said she did all her domestic chores before going to training, which takes place on Tuesdays and Thursdays.

Founder of the team Beka Ntsanwisi confirmed that the team will be leaving on Monday and return on June 24.

SA Elderly Football Association coordinator Kani Mkhabela said he had scouted a few players from other provinces to beef up the Limpopo team.

"The aim is to have a national team of both old women and men coming from all the provinces. We are busy launching the elderly soccer teams in other provinces, so that we can have our own soccer league in the country," he said.

Vakhegula Vakhegula will also travel to Germany in
mid-July for another match.

MEC for sports in Limpopo Thandi Moraka urged the grannies to "go and excel to a point where your male counterparts will also start their own teams".