Talent search on for diski grannies 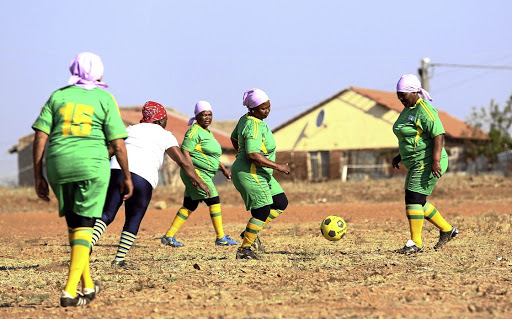 The search is on for the talented grannies that will represent SA in France next year.

SA Elderly Football Association [Saefa] will, in the next few months, tour all the provinces selecting the best grannies to be part of the Vakhegula-Vakhegula team who will be going to play a friendly match in France during the Women's World Cup in France in 2019.

This follows Vakhegula's successful hosting of a team from France at Nkowankowa Stadium, Limpopo, last week.

Together with other grannies' teams from other provinces, Vakhegula played a tournament as part of a five-day documentary ahead of next year's World Cup. France will play host from June 7 to July 7.

"We appreciate the department of sports and recreation in Limpopo for welcoming the visitors from France and for being with us throughout the journey of the documentary," said team administrator, Kanetani Mkhavele.

Soccer grannies having a ball at the World Cup

Bafana Bafana's absence at the World Cup in Russia has not stopped two grandmothers from attending the global showpiece.
Sport
4 years ago

"Despite the fact that the grannies benefit health wise by exercising, Saefa will also ensure they are in a position to put food on the table through sport."

The tournament was attended by councillor of greater Tzaneen municipality Maripe Mangena and Banyana Banyana players, Noko Matlou and Lebohang Ramalepe. The duo took part in the games.

Shot by Ukoncept Productions France, the documentary attracted grannies from across the country.

"Unfortunately, Saefa could not take more than eight teams since it was a one-day tournament," Mkhavele said.

"We would like to thank the grannies from Nkowankowa and Seshego who, basically hosted the tournament, for taking their pension savings to cater for all the teams and even the crowd at the stadium."