Residents blame spike in crime on nearby hostel 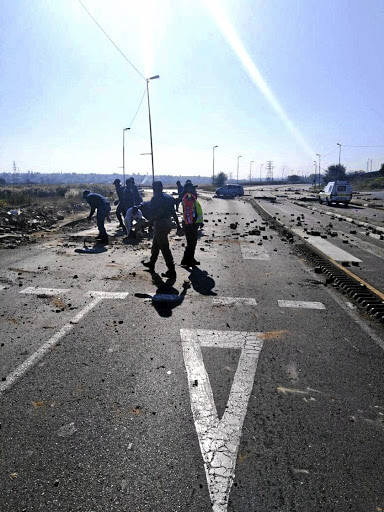 Police clear the Klipspruit Valley Road after residents protested against the high crime rate in the area./JMPD

Criminals living at the Nancefield Hostel in Soweto are terrorising people in surrounding areas, which has led to a spike in murder, robbery and home invasions.

Hundreds of Klipspruit residents barricaded Elias Motsoaledi and Klipspruit Valley roads with burning tyres and rubble yesterday, demanding police to curb the increase in crime as a result of syndicates operating from the hostel.

Residents further accused police of failing to make arrests because they were either scared of the criminals or were in cahoots with them.

A leader at the hostel, who asked not to be named, confirmed accusations made by residents and said he had personally taken the matter up with the Moroka police station commander, who promised to look into the matter.

"It's true. Some hostel dwellers commit crimes in surrounding townships. They hijack people, break into their houses and commit murder. It's known, but the police have not done anything even after we engaged with them," said the leader.

He said four people were robbed and killed in separate incidents on Sunday. "The community is fed up and I don't blame them. I would also barricade the roads if my safety was threatened."

The allocation represents an operating budget of R56.7bn and a capital budget of R7.8bn.
News
3 years ago

A man believed to have been involved in a string of murders in KwaZulu-Natal and at a Soweto hostel was arrested after a shootout with police.
News
3 years ago

Moroka police spokesperson Capt Mpande Khoza said criminals operating from the hostel evaded arrest by moving between various hostels in the province. "Its not true that officers are scared or are working with criminals.

The crimes that are committed in that area happen in the early hours of the morning or late at night. We do make arrests but the problem is that these criminals are not known and move across various hostels in Gauteng," Khoza said.

"There have been many murders over the past six months, some of them within the hostel and some in the township, but we can't say that they can all be attributed to hostel dwellers."

Kamohelo Motaung, who runs a spaza shop in Klipspruit, said he was robbed twice at gunpoint in the last eight months. "We are not safe in this area and the police are not doing anything about this."

He said the protest was aimed at bringing their plight to the attention of the station commander.

Amos Selepe said he was able to trace his Ford Focus to the hostel two days after it was hijacked. "These guys hijacked me when I was about to enter my neighbourhood on May 6. The police told me that there wasn't much they could do. I had to go in there to get my car without their assistance."