WATCH | Ramaphosa, Zuma share a laugh over 'benefits' of retirement 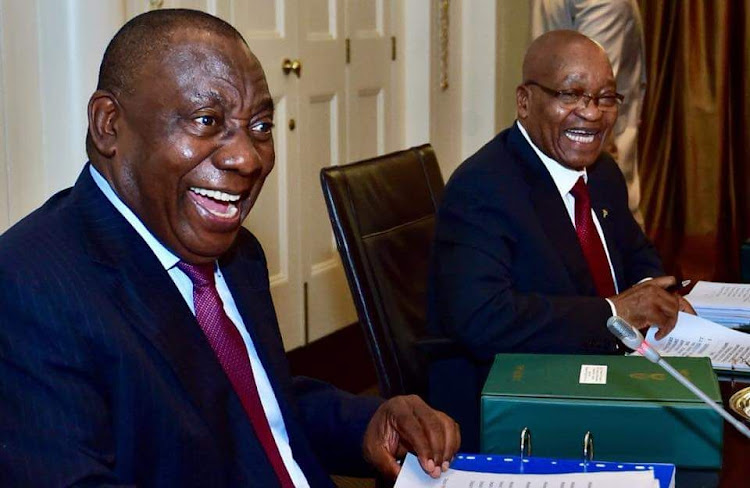 President Cyril Ramaphosa and former president Jacob Zuma shared a light moment when they exchanged words about the benefits of being on pension.

Ramaphosa was speaking at a dinner at the launch of the ANC's political school, the OR Tambo School of Leadership.

Shortly after concluding his speech, Ramaphosa paused to greet Zuma at one of the tables and remarked that he looked good since going on pension.

Zuma, who celebrates his 77th birthday on Friday, replied by pointing at his belly, indicating that it had grown somewhat, drawing a big laugh from Ramaphosa.

Our President, Comrade @CyrilRamaphosa concludes his speech and shares a light moment with our Former President @PresJGZuma saying pension looks good on him and he responds by showing his tummy growth. #GrowSouthAfrica #ThumaMina pic.twitter.com/D7N4GzBtil

During his speech, Ramaphosa condemned the actions of protesters - some wearing ANC T-shirts - who disrupted the launch of Pieter-Louis Myburgh's book Gangster State in Johannesburg on Tuesday night and called for books to be burnt.

Ramaphosa called these actions “strange to our movement".

“What we witnessed earlier this week is not what the ANC stands for,” he said.

These are cadres who, like all of us, condemn in no uncertain terms the actions of those who disrupted a book launch in Johannesburg a few days ago and who call for books to be burned. - President @CyrilRamaphosa #ThumaMina #GrowSouthAfrica pic.twitter.com/q3Is51TBIq