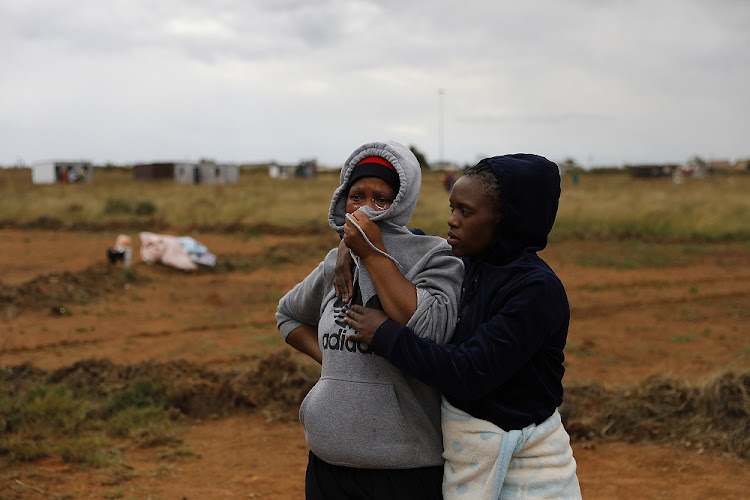 A sobbing Nonyamko Mgodeki is comforted by a friend.
Image: Alon Skuy

Residents of Ramaphosa village in Vereeniging have vowed to remain in the area despite their shacks being demolished by the Red Ants - leaving them homeless after evictions that turned bloody and resulted in the loss of lives on Wednesday.

Broken windows, twisted debris, tears, anger and blood were evident after the evictions, close to Rustervaal in Vereeniging.

Police spokesperson Capt Mavela Masondo confirmed that two people had died and three others were taken to hospital.

A sobbing Nonyamko Mgodeki stood outside her maroon painted shack. She covered her face with a hoodie after surveying the damage to her home.

"My heart is very sore. I lost everything. They took my takkies, my clothes and my R400. I don't know what to do anymore. I have nowhere to go," the inconsolable mother of one said while being comforted by a friend. 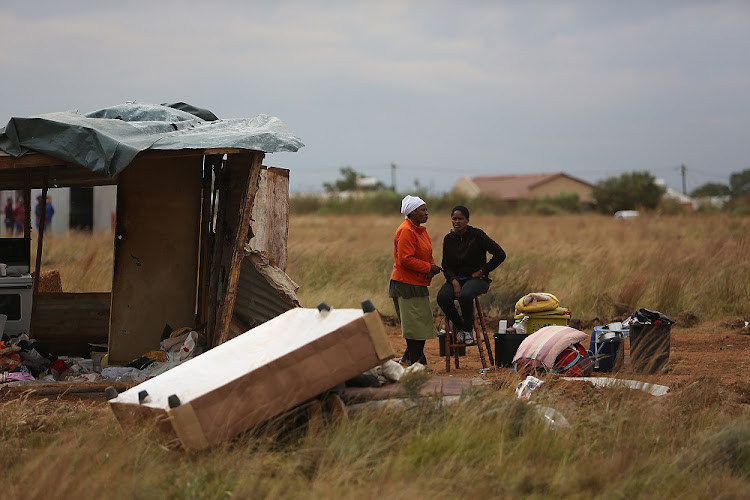 The aftermath of an attempt to evict squatters which resulted in a violent protest on Wednesday April 10 in Vereeniging.
Image: Alon Skuy

Shadrack Motlatse said residents were alerted about the evictions around 8am.

Motlatse was at work, a few kilometres away, when he received the news.

"We just heard the hammer and the zinc, and then we rushed here. I left the fork-lift just like that and rushed here.

"The Red Ants were breaking down the zozos and searching for valuable things to take."

He claimed to have spotted one of the locals and his wife, also clad in the red overalls, breaking down the shacks.

"These people were bought. How can the police protect them when we fight back?"

Motlatse believed that they had received approval to live in the area.

Masondo, however, said the people were evicted following a court order.

"We feel sad, we don't know where we are going to sleep," said Motlatse, pointing in the direction of a demolished shack a few metres away.

"You see, there is where one of the guys lived who died today. We used to work together."

They worked for a clay brick manufacturer in the area.

"He was a good guy and had no problem with anyone. He was a friendly person and a happy person." 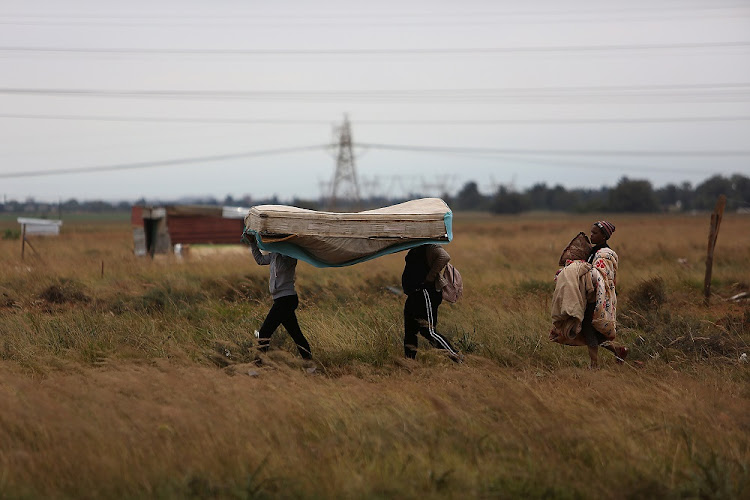 People carry away their belongings, looking for a place to sleep.
Image: Alon Skuy

Emfuleni local municipality mayor Gift Moerane said he was "highly disturbed" by the events which unfolded in Rustervaal.

"I would like to condemn any form of violence in any possible way, in particular leading to loss of life," Moerane said.

Moerane said the community of Rustervaal had brought the matter to his attention in the past week.

"In the course of engagements with communities and stakeholders it became clear that we should strive towards social cohesion and avoid dividing our communities along racial lines," he said.

Another local resident, Johannes Mohlophe, said they were supposed to receive seven days' notice to vacate.

"They started at the back to tear down the shacks. When we asked why they are tearing them down when we are supposed to first get seven-day notices [to vacate], they didn't give us such letters.

"We are getting shot, my arm is injured, all because the coloured people don't want us. Why don't they want us?" he asked.