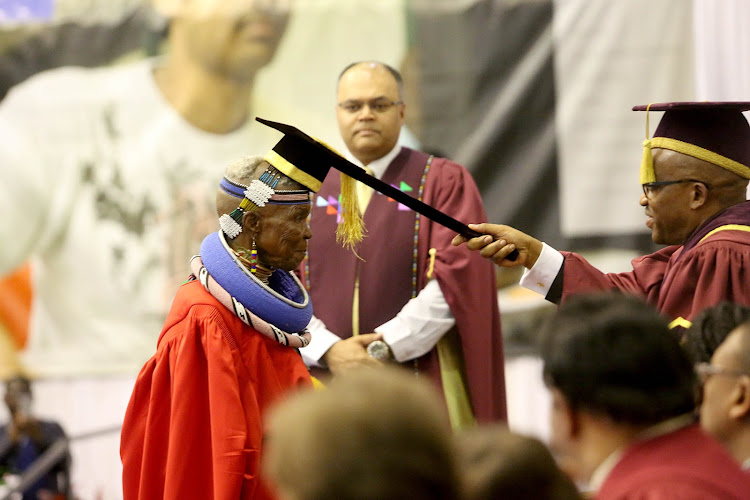 Esther Mahlangu receives her doctorate in visual and performing arts at the Durban University of Technology’s Spring graduation on Friday.
Image: THULI DLAMINI

He was one of four legends honoured with a doctorate in visual and performing arts at the institution’s spring graduation.

Another legend is Sipho Mchunu‚ Clegg’s close friend and co-founder of their band‚ Juluka.

Award-winning Ndebele artist Esther Mahlangu‚ who has painted murals on walls around the world‚ and on BMWs and vodka brand Belvedere and who featured on the cover of Destiny magazine‚ was also recognised by the university.

Welcome Nzimande‚ who paved the way on popular station Ukhozi FM for many vernacular radio personalities‚ was another recipient.

“I urge all of you that‚ as from today‚ work on your personal vision that may one day bring you onto this podium later on in your lives‚” he said.

Clegg was diagnosed with pancreatic cancer in 2015.

He was to have addressed 80 graduates from the arts and design and applied sciences faculties. His speech was read out by the executive dean of the faculty of arts and design‚ Dr René Smith‚ and focused on design from an art and cultural perspective.

“I think the ability to design things is one of the deepest aspects and expressions of being human‚” he wrote. “From our early ancestors’ first awareness of the infinite designs we see in nature‚ whether in the complex structure of a flower or the weaver bird’s nest … we have always been aware that the world around us operates and expresses itself through the designs that are apparent in it.”

The ceremony was part of the university’s two-day spring graduation which saw 1‚786 students graduate.