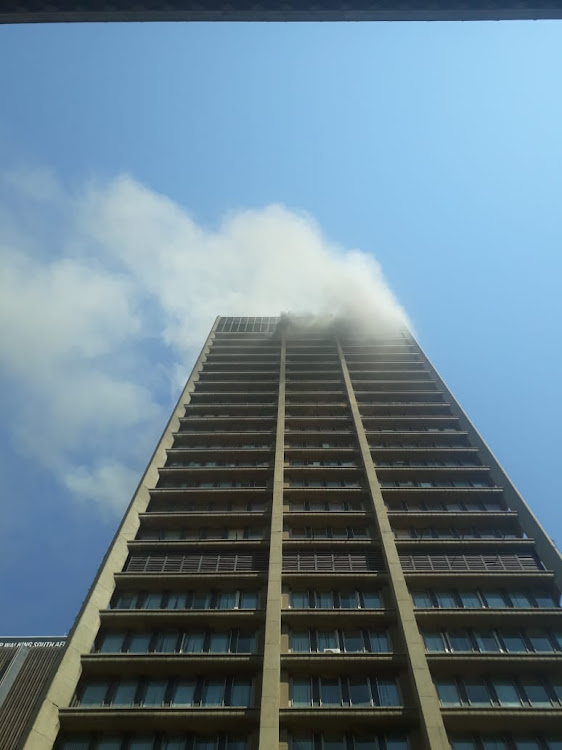 Staff ran out of this building in the Johannesburg CBD.
Image: FILE

Gauteng health department employees have described the terror of a deadly fire which broke out in a Johannesburg CBD building – with some running for their lives.

A fire broke out on the 23rd floor of the downtown Johannesburg building‚ trapping firefighters and civilians on a tiny ledge and civilians on the roof. Attempts by police to rescue those who are stuck with a helicopter have so far failed.

At least three firefighters have died‚ with a number of civilians unaccounted for. One of the fire fighters who died fell to his death when he slipped off a ledge while trying to evade toxic fumes through a window.

The building houses the Gauteng health and housing departments‚ as well as offices of the cooperative governance and traditional affairs department.

A financial clerk at the health department told TimesLIVE said she understood that the fire broke out in offices which housed the department's legal services‚ including the chief financial officer's office.

She said she managed to escape from her office when the fire alarm was sounded – running down the stairs to get outside.

"We just ran. We left everything behind. We ran from the building as a group‚” she said.

The woman said was terrified and that people were panicking.

“No one knew what was happening. It was terrifying. It's still very scary. We are afraid for the people who are still stuck inside‚” he said.

The woman‚ who cannot be named as she is not authorised to speak to the media‚ described how the situation was worsening‚ with ambulances constantly arriving.

"The fire is not going out‚” she said.

Another health department employee said he had been in his office when he heard explosion and people suddenly screaming‚ "Fire! Fire!".

"I didn’t know what was happening. I ran out of my office into the passage. People were trying to go down the lifts while others were running down the stairs to try and escape.

"I ran down the stairs as fast I could. When I got outside the building was covered in thick black smoke‚” he said.

The man said he was worried about the safety of his colleagues as no staff counts had been done.

"No one knows who is missing and who is not. It’s total confusion‚” he said.

He said it was not the first time there had been a fire in the building.

"Two months ago there was another fire. National Education Health and Allied Workers Union members raised safety concerns around the conditions in which we work in the building‚” he said.