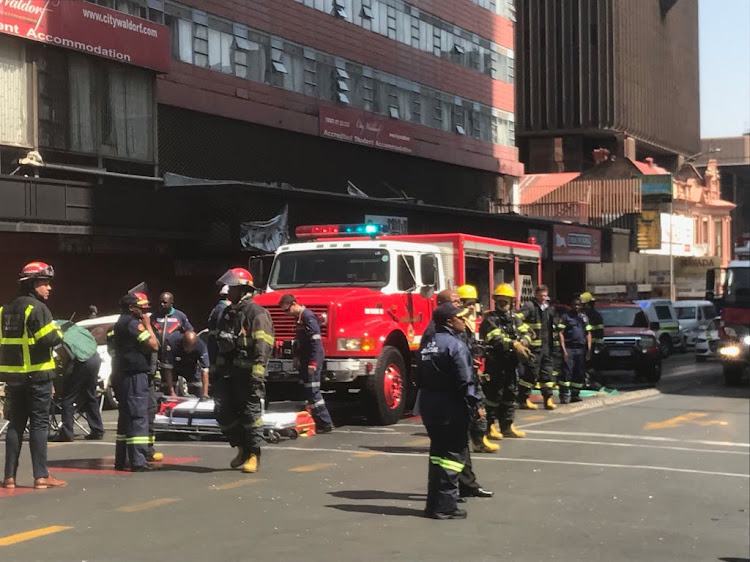 A total of three firefighters were killed in the Johannesburg city centre on Wednesday when they tried to contain a fire that broke out in a building that houses three government department.

As the firefighters fought the flames of the fire that started on the 24th floor, a body of one of their colleague laid on the pavement in front of the building covered with silver foil.

The firefighter, who could not be named until his family was notified. The city's MMC for public safety Michael Sun said the firefighter slipped and fell from the 23rd floor.

Sun confirmed that two other firefighters, who were trapped in the building, also died.

"I come to you with a very heavy heart, I'm extremely devastated. Earlier today we heard of one firefighter falling to his death, unfortunately we've received reports that two other firefighters that were trapped in the building also passed on," said Sun adding that they were still waiting for the bodies to be brought down from the building.

"We already requested our EMS team senior officials, to attend with the families to inform them of this very sad news."

He confirmed that additional eight members of their firefighting team were taken to hospital for various injuries including burns and exhaustion.

Sun said they were still battling with the fire that started at about 10am. Dozens of emergency vehicles, including ambulances, descended on the busy street formerly known as Sauer.

"We are still busy with the firefighting, as you can see, the flames are now out the window."

JMPD Safety and City of Joburg EMS personnel are on the scene.
News
3 years ago

Four firefighters were  initially trapped in the building but later rescued with the help of a chopper.

An eye witness who works at a nearby building said she saw the firefighter fall just after 10 am.

"He jumped out of the building. It was the most horrible thing to watch. I don't think I will ever forget what happened," she said.

An employee in the building said he did not take the  warning that the building was on fire seriously until he began to see the fire.

"It was just an ordinary day at work. Suddenly there was an announcement that the building was on fire. We were told to vacate the building and remove our cars. I thought it's a minor thing. I took my belongings and we went down the stairs.

"Of course  some people panicked and wanted to rush out," he said. The employee said they complained to management on several occasions about safety issues in the building.

"The ceiling is leaking, the lights are not working, sewer pipes are blocked all the time," he said.