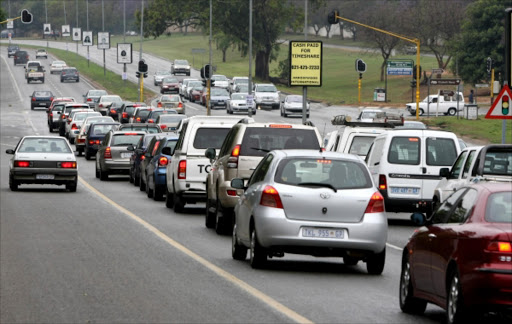 The nearly 200 insurance-sponsored traffic pointsmen who keep Johannesburg traffic moving will keep their jobs - for now.

The City of Johannesburg has extended its contract with Traffic Freeflow (Pty) Ltd. "The contract is to be extended for a period of six months subject to the finalisation of the city’s procurement process for the issuing of a final contract following a competitive tender process.

This means that‚ in due course‚ a new tender would be awarded to the best suitable PPP (public-private partnership) service provider to assist the JMPD (metro police) in traffic management. The JMPD will continue to conduct traffic management duties as part of its legislative mandate and ensure that Joburg roads are easy and safe to travel on‚" Mayor Herman Mashaba said in a statement.

"The city has gone to great lengths to ensure that any finalisation of a PPP contract is compliant with the relevant legislation and procurement policies. This legislation requires the city to ensure that this service is subject to a competitive tender process on a regular basis."

Nearly 200 traffic pointsmen who have kept Johannesburg traffic flowing for the past 13 years are set to lose their jobs.
News
3 years ago

Last week‚ this publication reported that Traffic Freeflow and OUTsurance had expressed disappointment that their contract would not be renewed come August 31. “It’s a very sad day for me personally… and in particular the motorists of Johannesburg‚ who have come to depend on the stellar service the pointsmen have offered in getting them through sticky traffic every morning and afternoon for the past 13 years‚”

Colleen Bekker‚ founder of Traffic Freeflow‚ said at the time. The companies expressed displeasure at being informed of the decision not to renew the contract at a very late stage. “We only became aware that the contract would not be extended or put out for a new tender at a rather late stage‚” said Bheki Zondo‚ Traffic Freeflow CEO.

At the time‚ the city said its decision not to renew the contract was as a result of the Johannesburg Metropolitan Police Department’s upgraded functions‚ as well as the appointment of an additional 180 traffic wardens who were to replace the pointsmen.

Mashaba said the City had struggled with the timely management of contracts to ensure a smooth transition between the end of one contract and the commencement of another.

"This is something I have instructed the city’s departments to examine and correct‚" Mashaba said.