Khensani’s life one of ‘compassionate love‚ bravery and courage’ 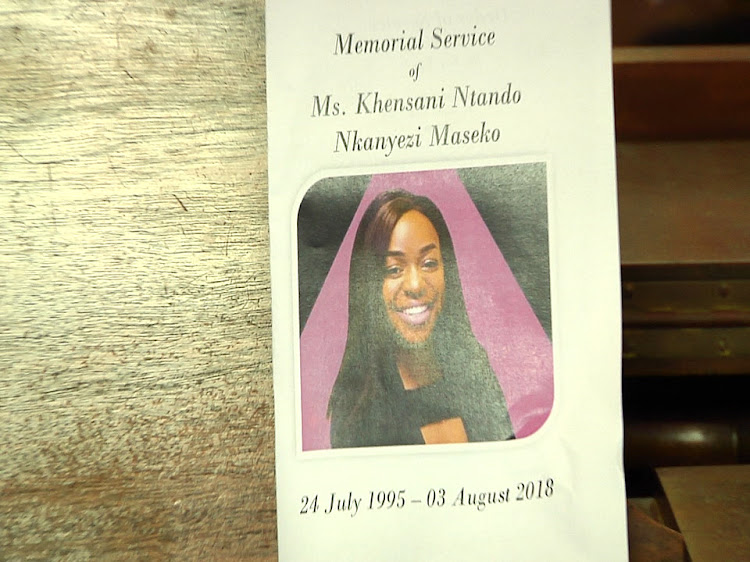 It was a very emotional moment for Thembi Maseko on Friday when she visited her daughter's hostel at Rhodes University to fetch her personal belongings.

Khensani‚ 23‚ a third-year BA law student‚ took her life at her home in Alberton on Gauteng's East Rand on August 3‚ days after telling university authorities that her boyfriend had raped her.

Paying tribute to her at a memorial service at Rhodes University‚ a family member‚ Professor Pamela Maseko from the University of the Western Cape‚ said "Khensi" was a source of "immeasurable joy" for her mother‚ grandmother and the rest of the extended family.

"She was her mother's best friend‚ her confidante‚ her ally‚ and her most precious treasure.”

Maseko said that her loss "brings in Thembi a range of difficult emotions including anger‚ emptiness‚ disbelief and deep numbness". "Her life‚ even though you might say was short‚ as you can see‚ was a life well-lived‚ with meticulous planning and execution - it was a life of compassionate love‚ bravery and courage.

"Yet‚ ironically‚ it is these character traits that‚ we assume‚ propelled her to end her struggles in the physical world. The circumstances around her death are tragic‚ and as a family we are still trying to make sense of them."

Said Maseko: "It is easy‚ in instances of death that is a direct or indirect result of gender-based violence‚ to start to direct our anger at some people and institutions as we’ve seen in the case of Khensi. Our wish as a family is to plead that all of us should take a leaf from Khensi’s life."

She said that it was time that “we take collective responsibility for the lives in our educational and other social spaces”.

“It is no use only identifying the problems and making recommendations. We know the problems‚ our responsibility‚ each one of us‚ is to do something.”

Khensani Maseko's friends‚ fellow students and the Rhodes University vice-chancellor praised her as an "incredible" leader.
News
3 years ago

The president of the student’s representative council‚ Nhlakanipho Mahlangu‚ said: "The one thing I learnt from Khensani is to be an innovator; to never see the limits before you. Khensani was a person of endless possibilities‚ a person of ideas."

A spokesperson for the Maseko family‚ Palesa Gcwensa‚ said the family will not be commenting on their visit to Rhodes University.

"That's private to the family and it's too emotional for them."

She did‚ however‚ confirm that the family visited the university to fetch Khensani's personal belongings.

On the day of her death‚ she posted her birth date and her "death date" on her Instagram account.