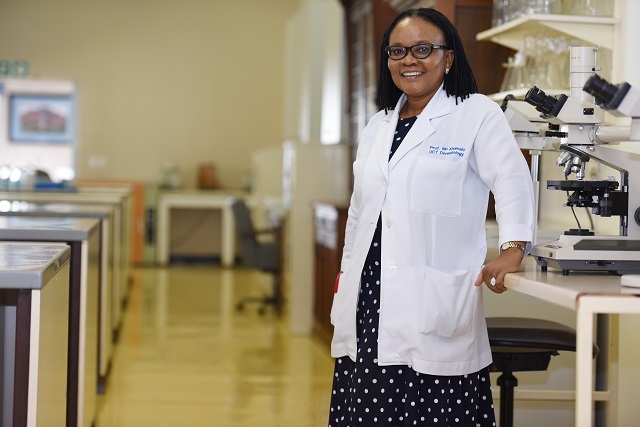 But one of the most moving stories — shared by many speakers from different perspectives — was about the dreamlike romance the University of Cape Town health sciences dean shared with his wife and soulmate‚ Professor Nonhlanhla Khumalo.

Health Minister Dr Aaron Motsoaledi told mourners in Cape Town he first saw the couple together when Mayosi was just 16. The future cardiologist had matriculated with six distinctions the year before‚ a 15-year-old genius at St John’s College in Mthatha.

Tribute paid to Bongani Mayosi – the brilliant professor who ‘lived...

As a medical student‚ he went to the University of Natal (now UKZN)‚ where Motsoaledi was asked to orientate new students.

“The two of them were together in that group‚” he said‚ “and there was a bus taking us from place to place. I noticed them sitting by chance next to one another. Classically put‚ this was love at first sight.”

In more recent years‚ Khumalo — professor of dermatology at the UCT medical school — had told him: “We sat together on the bus that day and have been at each other’s sides since.”

But eight days ago‚ said the minister‚ they had to “leave each other’s sides” when 51-year-old Mayosi took his own life.

The cardiologist’s sister‚ Ncumisa Mayosi‚ also spoke about the relationship he had with his wife‚ and described his “funny contagious laughter” and incredible sense of humour.

“He had a boy-like quality and was often bubbly with excitement‚” she said.

Studying in Oxford‚ she had spent a lot of time with the couple as Mayosi was also there completing his PhD. She affectionately described how she often went round to their house‚ where she became the “unpaid babysitter”‚ looking after the children.

“They would laugh and chat for hours‚” she said. “He and his wife were the best of friends.”

He adored his three daughters‚ and in return they “worshipped the ground he walked on”.

The family‚ she said‚ “had been inundated with countless messages of support and condolences — and these are both heartbreaking and soothing”.

Mayosi’s classmate‚ Dr Fundile Nyati‚ said “he was captured by [Khumalo] from day one‚” and later‚ “when we protested about the food we were served‚ Bongani was sorted. He had Nonhlanhla feeding him delicious food.”