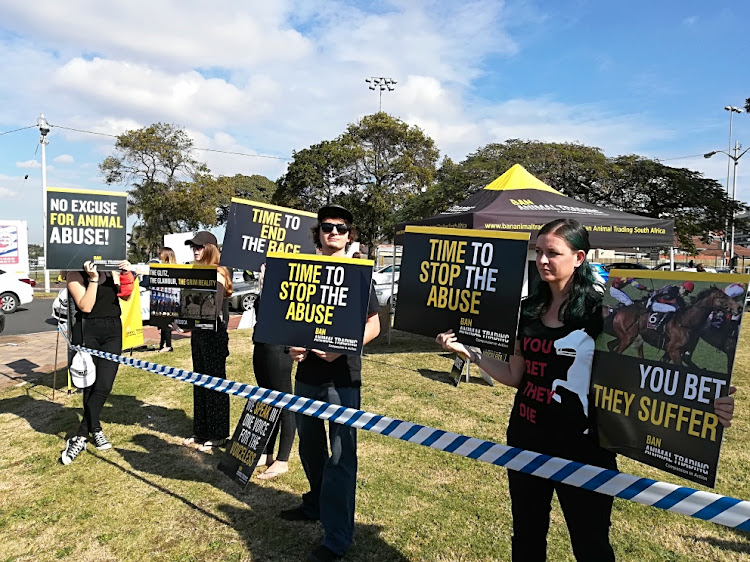 Described as a first of its kind‚ the protest is not aimed at bringing the 122nd Vodacom Durban July to a halt.

Speaking on behalf of Ban Animal Trading South Africa‚ Prathna Singh told SowetanLIVE that the protest aimed to raise awareness about the abuse of racehorses.

"Ban Animal Trading is an organisation that aims to educate and raise awareness on all forms of animal exploitation. The horseracing industry is one that has been overlooked for a long time.

"We decided to protest this year to raise awareness on the abuse of these animals for entertainment‚" she said.

She said several racegoers‚ who had seen the protest‚ had stopped to get more information on animal trading.

"We know it will take a very long time before the event is stopped to protect the animals‚ therefore we just want to educate people now."

The annual event is the biggest and most prestigious horse racing event in the country and attracts more than 50‚000 people‚ who cram the confines of the Greyville Racecourse to take in the fashion spectacular‚ entertainment and horse racing while millions watch the spectacle on television.

The marquee village crawls with first time attendees as well as loyal enthusiasts. The highly-anticipated event attracts dignitaries and celebrities.

Race organiser Gold Circle said the race day is the centre of an economic tidal wave that sees tills ringing across the province‚ with R160-million spent directly in the region by Vodacom Durban July visitors.

"Add to that over R100-million wagered on totes on-course and off-course‚ and the race day’s economic churn is expected to be close to R300-million this year‚" it said.