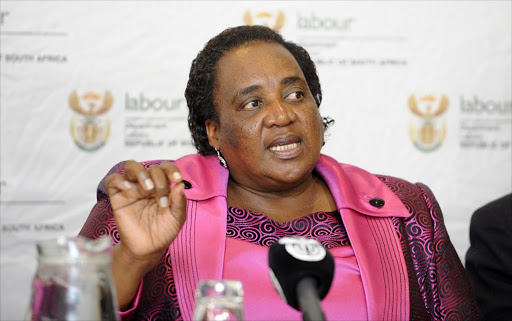 Labour Minister Mildred Oliphant confirmed on Monday evening that it would not be possible to implement the National Minimum Wage Bill on the initially envisaged implementation date of May 1 because the parliamentary process dealing with it will not be completed by then.

The minister updated the media on the progress regarding the National Minimum Wage Bill‚ the Labour Relations Amendment Bill and the Basic Conditions of Employment Bill that are currently being considered by the Parliament's portfolio committee on labour.

Oliphant said the bills were highly contested and "it has become apparent that the ambition for the National Minimum Wage Bill to become law by May 1‚ 2018‚ may not be practical given the high volumes of public submissions‚ both written and oral”.

The South African Federation of Trade Unions and #OutsourcingMustFall are marching in Johannesburg on Thursday in protest against outsourcing and the ...
News
4 years ago

"We are also aware of a number of important issues that are being raised in these public hearings which parliament will have to consider as part of concluding the bills. We stand ready to take instructions from the parliamentary process‚” she said.

The bills‚ the minister said‚ were now under the authority of Parliament and the executive no longer had any control of these processes.

The department is due to give its response to public submissions on the bill on Wednesday‚ and then the committee will have to consider the proposals received. The bill also has to be processed by the National Council of Provinces.

Oliphant pointed out that regulations to the bill would also have to be prepared and promulgated.

There have been calls for a delay in the implementation of the national minimum wage to allow the parliamentary portfolio committee on labour more time to properly consider all the submissions‚ which number over 40. Concerns were expressed over a rushed process and acting committee chairperson Sharome van Schalkwyk agreed to a postponement of the implementation date.

The SA Local Government Association has begun wage negotiations with unions representing workers in all municipalities across the country.
News
4 years ago

The National Minimum Wage Bill was‚ to a large extent‚ the outcome of negotiations within the National Economic Development and Labour Council (Nedlac) although it also contains aspects introduced by the Department of Labour‚ some of which are opposed by the labour movement. Among these was the proposal to do away with sectoral determinations which protect vulnerable and un-unionised workers.

Since its introduction‚ Oliphant has had to clarify that the definition of “worker” in the bill‚ which differs from the one adopted by Nedlac will have to be changed so that it includes all those people who work for another and receive payment‚ including independent contract workers.

Busa proposed that individuals at work purely for the purposes of gaining be excluded from the national minimum wage though the National Minimum Wage Research Initiative at the University of the Witwatersrand urged that learnerships should not be excluded from the measure.

In terms of the National Minimum Wage Bill the minimum wage will be set at R20 per hour while that for domestic and farm workers will initially be set at R15 and R18 an hour respectively and will be adjusted to reach the national minimum wage within two years of implementation.