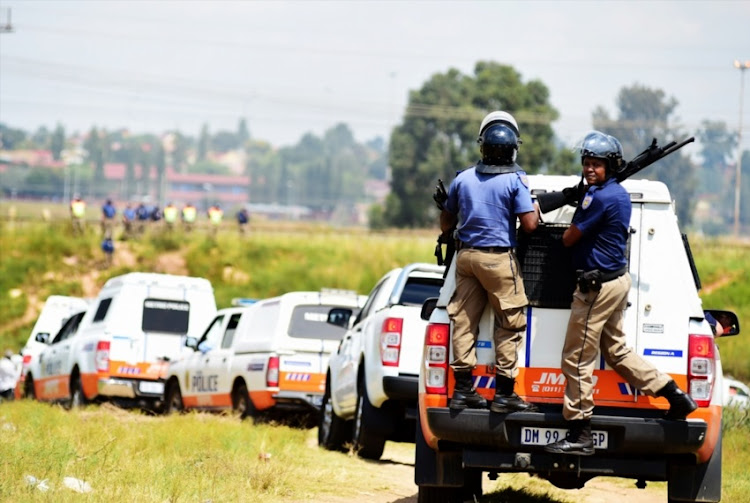 Johannesburg Metro Police Department (JMPD) officers demolish illegal shacks and stop land invasion by squatters from Mzimhlophe on March 13, 2017 in Soweto, South Africa. The squatters said they had erected the shacks so they can have some shelter.
Image: Gallo Images/ Lucky Morajane)

Two Johannesburg Metro Police officers have been discharged from hospital after they were allegedly attacked by a taxi driver and his passengers in Cosmo City.

A statement from the city’s public safety department stated that the incident happened on Saturday.

“The JMPD officers were called to attend to an incident and stopped the suspicious minibus taxi on the corner of Angola Road and South Africa Road‚” the statement read.

“When the suspicious taxi was pulled over and questioned‚ the driver and his passengers became aggressive and attacked the officers. The suspects managed to disarm one of the officers and took a cell phone away from them.

“During the scuffle‚ two of the officers sustained minor injuries and were taken to Milpark Hospital for treatment. The third officer was not injured.”

A probe into the incident is under way.

On Sunday‚ two officers were reportedly attacked during a routine stop-and-search operation at the intersection of Main Reef and Houtkapper roads.

“A white LDV bakkie was stopped for overloading of passengers which is a contravention of the traffic laws. As the JMPD officer was busy issuing a citation to the driver‚ one of the passengers became aggressive and assaulted the female JMPD officer and hit another male officer with a fist on the face‚” Joburg’s public safety department said.

“The suspect was immediately arrested and detained at the Florida Police Station”.

Public Safety MMC Michael Sun has condemned the attacks on the officers‚ saying such treatment will not be tolerated.