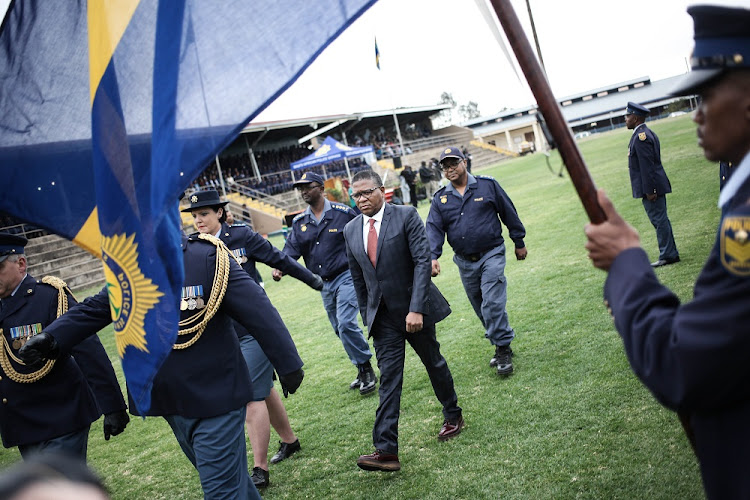 The process to select candidates for the post of national police commissioner should be from clear criteria and interviewed by an independent panel.

Candidates for the post of national police commissioner should be selected from clear criteria and interviewed by an independent panel‚ to prevent “another disastrous police appointment by President Jacob Zuma“‚ says two watchdog groups.

The president is once again ignoring the National Development Plan’s (NDP) proposal for a transparent and merit-based process to choose the right man or woman as South Africa’s top cop‚ Corruption Watch and the Institute for Security Studies (ISS) said. The NDP and its policing recommendations have been endorsed by the ANC and the cabinet.

“If Zuma fails to implement the NDP recommendations‚ he is once again snubbing Cabinet‚ his party and Parliament‚ and neglecting the urgent need for skilled police leadership to bring down violent crime‚” said Gareth Newham‚ head of the ISS justice and violence prevention programme.

Minister of Police Fikile Mbalula announced at the beginning of his presentation of the 2016-17 national crime statistics in parliament that he would ...
News
3 years ago

“Since becoming the president‚ Zuma has systematically weakened South Africa’s criminal justice system. We are wary of who he will appoint if the decision is again taken behind closed doors against unknown criteria.”

Zuma has a poor record of policing appointments‚ the ISS and Corruption Watch said.

First came Bheki Cele‚ who had no policing experience but was appointed in July 2009‚ then fired in October 2011 after a board of inquiry found he was guilty of maladministration.

Then in June 2012 Zuma appointed the inexperienced Riah Phiyega‚ who was suspended after a commission of inquiry into the police shooting of 112 striking miners at Marikana‚ killing 34. Despite a judicial board of inquiry recommending he fire her‚ Zuma allowed her contract to conclude while she received full pay‚ pension and benefits‚ ISS and Corruption Watch said.

“As a result‚ SA has not had a permanent SAPS national commissioner for more than two years‚ during which time serious violent crime has increased significantly. The incumbent Lesethja Mothiba is in an acting role.”

Mbalula: 'Lazy police are letting our people down'

Police Minister Fikile Mbalula on Tuesday criticised “lazy police” for failing to tackle crime.He said crime had dropped by 1.8% but: “I don’t feel ...
News
3 years ago

The ISS and Corruption Watch called on Mbalula to urgently implement the NDP recommendations by establishing a national policing board to develop the criteria for SAPS commissioner.

“An independent selection panel should then assess potential candidates against these criteria in a transparent and competitive manner‚ with public involvement‚” the two groups said.

“. . .The dedicated and honest men and women of the SAPS cannot afford to have another secretive appointment of the wrong person‚ while the expertise‚ experience and integrity of many skilled officers is ignored. We call upon the ANC and the police minister to act urgently to stop the president from repeating past mistakes.”