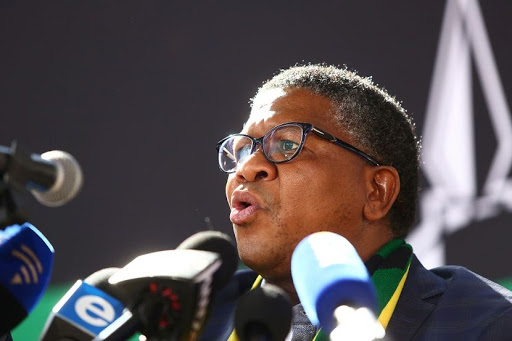 Minister of Police, Fikile Mbalula briefs the media on organisational renewal document that was presented to the ANC Policy Conference held at Nasrec Picture: Masi Losi

Minister of Police Fikile Mbalula announced at the beginning of his presentation of the 2016-17 national crime statistics in parliament that he would begin work amending the employment regulations of South African Police Service (SAPS) officials.

He said this was a bid to make the SAPS more efficient and accountable to South African civilians. Briefing parliament’s portfolio committee on the police‚ he announced that more than 2.1-million crimes were captured in the statistics‚ but lamented an increase in some of the more violent crime categories.

Murder was up to 19‚016 in the year‚ increasing by 343 from the previous year. Attempted murder and robbery with aggravating circumstance also increased. Sexual offences and assault with grievous bodily harm‚ according to the statistics‚ have decreased.

The SAPS delegation acknowledged that it could not tell conclusively whether the decrease in sexual offences was as a result of increased police visibility and intervention‚ or a decrease in reporting.

Mbalula said that the constitution demands that SAPS be controlled by the civilian arm of governance to ensure an accountable‚ efficient and functional police service.

He told the committee that deputy minister Bongani Mkongi was absent from the meeting due to a bereavement‚ as his nephew had died in a stabbing incident in Gugulethu‚ Cape Town.

He admitted that categories such as robbery remained a concern. It is more policeable than other contact crimes‚ he said‚ but it is a contributor to the those other contact crimes too. He added that robbery with aggravating circumstances – including hijackings – were becoming sophisticated in nature.

“Contact crimes [show] a fairly consistent decrease‚ [after they] increased in the preceding three financial years. Despite a decrease in this financial year‚ murder and robbery under aggravating circumstances have seen an upward trend‚” he said.

Mbalula conceded that instability in the leadership of the ministry’s agencies‚ including the SAPS‚ contributed to various inefficiencies that continued to trip the police up in their fight against crime.

“We must admit to this committee: the question of chop and change of police commissioner over many years has affected the focus and direction of the police. We must not tell a lie and claim easy victories. Our role is to hold people accountable and to give our people direction‚” he said.

Mbalula again defended the constitutionally problematic threats that he has made to criminals in public addresses during his time as minister. He said criminals were violent individuals who should be spoken to in “the language they understand“.

“When I tell criminals that they will piss and drink it‚ I mean it because I am speaking to criminals in a language that they understand. This is not just talk. We are strengthening our capacity‚” said Mbalula.