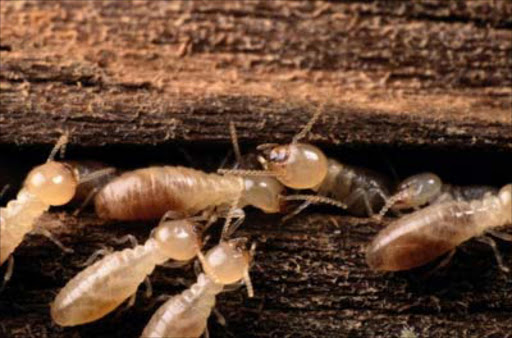 Kathimbu walks around the structure covered with banana leaves, drumming on a tin-like vessel and stamping his feet on the ground.

"The noise is to make it sound like rainfall, so that the termites are tricked into coming out of the ground," he told the Thomson Reuters Foundation.

Farmers' traditional crops have suffered here in recent years due to long periods of drought. Some are taking up construction work to supplement their income, while others like Kathimbu are harvesting insects whenever the rainy season is delayed.

At this time of year, Kathimbu's farm should be sprouting with a waist-high maize crop. But only wilting cassava stems populate the parched terrain.

"Five years ago I could store enough maize and beans in my granary to feed my family for seven months," said the father of six. "But now all my grain is depleted three months after the harvest, and only cassava is left."

Kathimbu and his family are not alone in grappling with this situation. Willy Bett, Kenya's cabinet secretary for agriculture, livestock and fisheries, declared in November that the country was facing severe drought.

"The intensity of drought varies from one area to another," he told a congress of the Seed Trade Association of Kenya. By his estimation, Kathimbu's village lies in one of the most affected areas.

According to the Nairobi-based International Centre of Insect Physiology and Ecology (ICIPE), a growing number of farmers in eastern and western Kenya are now harvesting and eating insects like termites to cope with prolonged drought.

"When I have picked up enough termites, I take some to the nearby Kambandi open-air market and sell them to other families," Kathimbu explained. A cup of insects fetches KES 10 (almost $0.10).

The most he has ever made in a day selling termites is KES 500 - which is "still far less than I used to make selling maize", he said.

On good days, though, Kathimbu uses the extra money to buy maize flour to make ugali, a popular white bun-like dish and a treat for the family.

Another advantage of termites is that they are rich in protein, according to ICIPE scientist Komi K.M. Fiaboe.

But farmers like Kathimbu need to establish proper insect farms to prevent damage to other crops, said Fiaboe.

"While termites help decompose the soil, they can also attack crops when the soil lacks humidity and minerals," he explained.

He suggested breeding insects that multiply quickly and can be harvested easily, like termites, crickets and grasshoppers, which do less damage to crops than some other species like locusts.

A recent study published by the African Journal of Food, Agriculture, Nutrition and Development found that people still see insects as ugly, smelly and poisonous creatures that cause allergic reactions.

"This is because people harvest wild insects and consume them raw, leading to negative effects on their health," explained co-author Kennedy Pambo, a researcher at the Jomo Kenyatta University of Agriculture and Technology.

Cutting down trees and digging up the ground to make traps like Kathimbu's termite mound also damages the environment, he said.

"This can be solved by rearing insects in a controlled manner, instead of harvesting them at random," said Pambo.

"When harvested, they should be mixed with other foods like maize, and milled into flour. The resulting porridge is nutritious because it has high levels of starch and protein," he added.