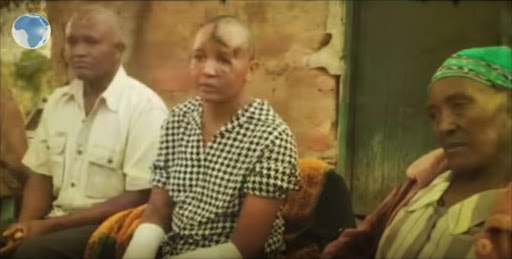 A Kenyan man who chopped off his wife’s hands with a machete because she had not conceived a child must face the full force of the law to deter other perpetrators of widespread domestic violence in Kenya, women’s rights activists said on Tuesday.

Stephen Ngila from Machakos County in southern Kenya, was yesterday arrested and charged with attempted murder, after attacking his wife, Jackline Mwende, almost two weeks ago, according to the women’s rights organisation Equality Now.

“This is a particularly shocking case for Kenya ... even though domestic violence is rampant,” Naitore Nyamu of Equality Now told the Thomson Reuters Foundation by phone from Nairobi.

Ngila cut off his wife’s hands and hacked her head with a machete after a dispute about the fact that she had not fallen pregnant in seven years of marriage, local media said.

The 34-year-old told Mwende, 27, ‘today is your last day’ before attacking her, said the Daily Nation newspaper, which published a video of the victim with a deep gash on her head, and stumps where her hands once were, wrapped in bandages.

Mwende said she was surprised by the attack, as doctors told the couple that she was fertile, while Ngila was impotent.

The Nairobi-based Federation of Women Lawyers (FIDA) said Ngila should be immediately investigated and prosecuted.

“We are angered by the escalating cases of violence against women in country ... and that nothing has been done about it,” said FIDA Kenya’s chairwoman Josephine Mong’are.

Almost half of Kenyan women who have ever been married have been physically abused by their husbands, government data shows.

Domestic violence is widely accepted and victims rarely seek justice due to social pressure and little faith in the judicial system, according to Nairobi’s Gender Violence Recovery Centre.

“We can’t afford to let the perpetrators act with impunity - which has sometimes been the case in recent years,” Nyamu added.

Kenya last year passed a domestic violence law, which had been pending since 2002, which criminalised a range of offences from verbal abuse and intimidation to assault and rape.

The legislation also ensured that victims receive counselling and other forms of support.

“While stigma and shame remain, women now have confidence to report domestic violence, because they know it is illegal, and that there is a law that backs them,” said Joan Nyanyuki, executive director of the Coalition on Violence Against Women.

“The law has created a safety net for women,” she added.

Kenya’s Office of Public Prosecutions was not immediately available to comment on the case.