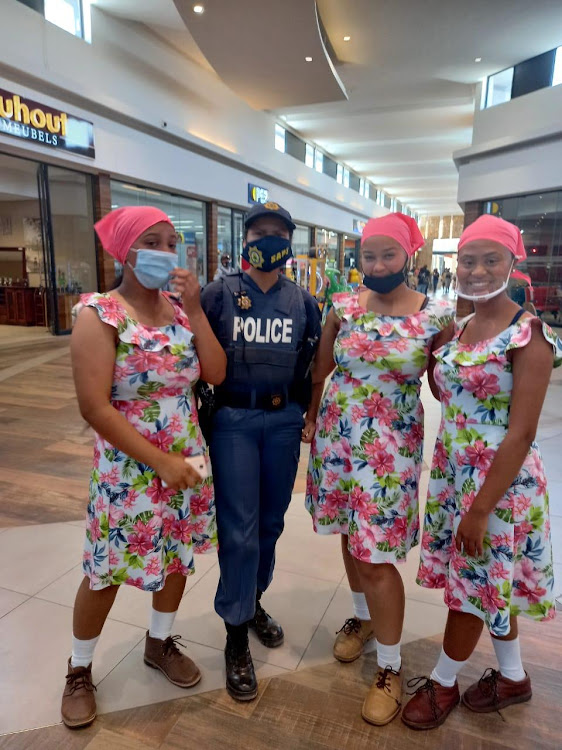 Vredendal police trainee Anechia Cloete warmed the hearts of many this week when she joined Griekwa Rieldansers Vredendal to show her moves.
Image: Supplied

When police videos circulate on social media, it's often for unhappy reasons, but a video of a police trainee in Vredendal, in the Western Cape, had moves that got people jiving along, instead of complaining.

In a video that was posted on the Facebook page of Griekwa Rieldansers Vredendal, police trainee Const Anechia Cloete can be seen doing the traditional Khoisan dance so meticulously to the curiosity and excitement of onlookers at the Maskam Mall.

Cloete, who turned 21 on Friday, has been part of the cultural group since childhood. Dance trainer and the policewoman’s aunt, Elsabe Cloete, had asked her to join the dance group during her visit to the mall with a colleague.

“She was with her colleague when they went past us while we were performing. I asked her to join us for a few minutes as she’s been part of the group from the age of seven. Judging by the comments on social media, people obviously loved her.”

In a post that’s been widely shared on Facebook, Lulamile Lu Mhlongo could not hide his emotions: “Culture is culture ... I am Zulu but watching this, especially when the cop comes in, it brought a tear in my eyes. Well done!”

Janne Kirsten said: “Looooove this ... these are the people who make our country beautiful.”

Alice Misoya Bute wrote: “Wow! Can’t get enough of this. It's so beautiful. Ek kry behoorlik hoendervleis [it gives me gooseflesh].”

“Unity in dance! SA we can do this ... all together ... we can find our humanity again and just love each other,” said Beverley Rhoda, while Ursula Baker summed up the performance with these words: “Just love it — such joy. Just what we need in SA — hallelujah!”

Elsabe said the cultural group, which is currently the reigning champion of the ATKV Rieldans dance competition in the under-18 category, has been performing the cultural dance since it was revived by the Khoisan in 2003.

Today the celebratory dance, which was originally performed by the Khoisan people during rituals to communicate messages, using the body language of animals and birds, has become very popular in the rural parts of the Western Cape and Northern Cape.

A lot of young people in this region have used the dance to stay out of trouble and to deal with their life challenges.

Benjamin Bock, an activist and former project manager of the ATKV Rieldans project who was instrumental of in the revival of this cultural dance, said the dance has contributed immensely to cultural tourism in the two provinces. It has also given rise to the popularity of the so-called veld shoes or hunter boots as dancers wore these shoes when performing.

Though the dance, which was originally used by the Khoisan to enthuse women, has been modernised since its revival about 15 years ago, it still fulfils a similar role — “to bring communities together”.

“It’s a celebratory dance that basically emulates the body language of animals or birds such as springboks and ostriches to communicate a certain message. People use different themes and some have used it to communicate messages against gender-based violence for instance, while others have used to express love,” he said.

Elsabe said the constable had used the dance to cope with the death of her mother when she was seven years old. “A lot of young people in this region have used the dance to stay out of trouble and to deal with their life challenges,” she said.

“Anechia and her younger sister had been single-handedly raised by their father, and the dance has been very instrumental in their lives. The dance has played a major role in discipline and helped many young people with leadership qualities.”

Since the video was posted on social media, the constable has been getting a lot of attention, including from her police colleagues who want to learn her dance moves.

“People love it and want to be part of it,” added Elsabe.

Mahlaula is the genius behind popular dance craze John Vuligate

Charismatic dancer, choreographer and singer Jahman Samuel Mahlaula is the man of the moment.
Entertainment
11 months ago

Katlego “Katt” Mohlahlo was just an ordinary matriculant before her life changed overnight thanks to the viral video of her doing the John Vuli Gate ...
Entertainment
11 months ago
Next Article