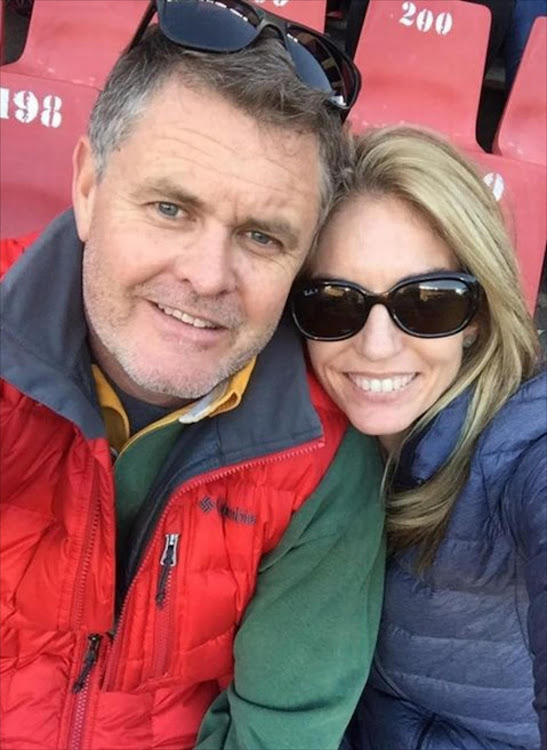 Jason Rohde and wife Susan, who was found with an electric cord around her neck. Image: FACEBOOK

The WhatsApp messages on the phones of the three central characters in the case against murder accused Jason Rohde tell a story of his fiery love for his mistress Jolene Alterskye and loathing for his wife Susan.

Rohde stands accused of killing the mother of his three daughters in their hotel suite in Stellenbosch last year.

Details of the chilling exchanges between the couple and Alterskye emerged in the High Court in Cape Town on Monday. Cellphone expert Warrant Officer Anna-Marie van Niekerk testified about the details of certain messages as deemed important to the case by the investigating officer Sergeant Marlon Appolis. Many of the messages were sent within the last 24 hours of Susan's life.

In July last year‚ Rohde‚ who was the director of Geffen International Realty Franchises‚ attended a company conference at the Spier wine estate in Stellenbosch. Susan accompanied him and Alterskye‚ an employee‚ was also there.

Rohde was expected to give a speech as one of the company’s CEOs on Saturday 23 July 2016.

WhatsApp exchange between Rohde and Alterskye on the morning of 23 July 2016:

WhatsApp exchange between Rohde and Susan on the morning of 23 July 2016:

Susan (11:19:09): “Change those f***ing numbers on your phone that are blocked to normal numbers now and not letters.”

Rohde (11:35:49): “Because if I call her it will come up on seri your idiot!!! Now leave‚ I have had enough. On my work day you are doing this to me. I want you gone now and I don’t care about the consequences.”

WhatsApp exchange between Susan and her psychologist Jane Newcombe at about 8pm on 23 July 2016:

Susan: “I shook her hand and said I hoped we didn’t have to meet again.”

Newcombe: “Did it leave you feeling in control?”

Newcombe: “Great! So tomorrow will be better. Have a good night.” (This message was never read.)

On July 24‚ the final messages from Susan’s phone went to Alterskye just after 7 am on the morning Rohde said he found her hanging from a towel hook fixed to the bathroom door.

According to Rohde‚ at about 7 am he and Susan woke up and she was still “very cross” with him. He said she went into the bathroom and he fell asleep again.

If the police's records are accurate‚ it was about that time that Susan replied to an earlier message sent by Alterskye which read: “Go wash your mouth.” Susan wrote: “Whore-wash your own f***ing mouth…After you such my husband’s dick” (sic)..Jason said you were only good for one thing and that’s why he keeps coming back. He said you would be the last person he ever wanted to be with.”

At the same time Jason receive a message from a friend asking if he was OK. He replied: “Drama‚ but okay.”

Van Niekerk also testified that Rohde and Alterskye called each other a total of more than 2‚266 times between February and July 2016.

Defence advocate Pete Mihalik stated that during the same period Rohde and Susan called each other a total of 1‚703 times.

The case continues on Tuesday when Newcombe is expected to testify.

Murder accused Jason Rohde’s wife and sister-in-law were both greatly upset about his infidelity‚ the Cape Town High Court heard on Thursday.
News
4 years ago

Susan Rohde sent WhatsApp messages to her husband’s lover more than 80 minutes after a pathology report said she was killed.
News
4 years ago
Next Article