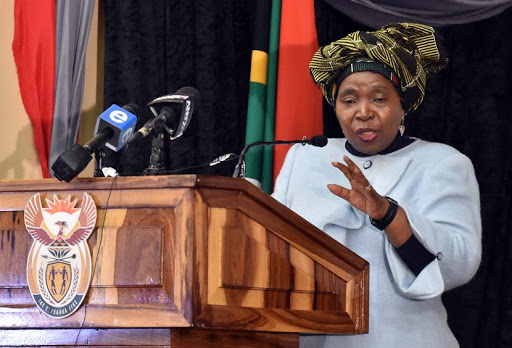 The ANC Youth League in the Western Cape has thrown its weight behind Nkosazana Dlamini-Zuma as their presidential candidate to take over from President Jacob Zuma.

Their support comes after they held a special meeting in Cape Town on Sunday.

The league wants Mpumalanga Premier David Mabuza to be her deputy‚ Free State Premier Ace Magashule to be secretary-general‚ and ministers Nathi Mthethwa and Nomvula Mokonyane to be chairman and treasurer-general respectively.

ANCYL Western Cape chairman Muhammad Khalid Sayed said they do not feel that the rest of the leaders in the ANC top six — save for Zuma‚ who will be stepping down‚ and Duarte — are capable of taking the ANC forward.

“There are a good crop of leaders‚ even in the top six [but] we just don’t feel that for where we want to move now‚ the current top six as it is‚ [will] take us where we need to be‚” said Sayed.

He said the province nominated Mokonyane to be treasurer-general because she had worked in the Western Cape and as a result‚ they had first-hand information of how she operates.

“The rationale behind Nomvula Mokonyane‚ is that we feel she is somebody who has been able to inject lots of vibrancy into the organisational machinery of the ANC and as a result ...that puts her in good standing to be a treasurer-general‚” said Sayed.

But some PEC members boycotted the meeting and had claimed that it did not meet quorum because of the boycott.

League members‚ who spoke on condition of anonymity‚ are in support of Cyril Ramaphosa to succeed Zuma. They branded the meeting as a lobby structure of Dlamini-Zuma.

But Sayed hit back saying “they were not in the meeting‚ I don’t know how they can say it [did not] quorate.”

He challenged any disgruntled members to produce photos of the meeting‚ among other things‚ as proof that the meeting didn’t meet quorum.

In a statement on Monday‚ the league said as a critical body of opinion inside the ANC they nominated the leaders whom they believed have the ability to play their part in a solid and united collective which will bring “economic freedom in our lifetime”.

“We believe that these cadres [have] the organisational and political acumen to make a meaningful contribution towards the rebuilding and revitalisation of our glorious movement‚” read the statement.