Van Breda tells his side of the story 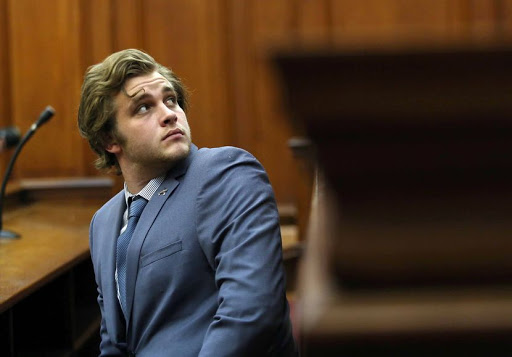 Henri van Breda at the start of Day 6 of his murder trial. Picture Credit: Esa Alexander

Day 54 of the Henri van Breda axe murder trial‚ and finally‚ the accused is telling the story from his perspective – complete with details of a “close-knit” family who did “as many outdoor activities together as possible”.

Appearing in the High Court in Cape Town on the first day of his testimony‚ Van Breda – accused of axing his parents and brother to death – testified on camera‚ despite an application by his counsel that the cameras be turned off.

Judge Siraj Desai said: “The right to broadcast information and the freedom of expression are accepted pillars in the constitutional order. It forms part of an endeavour to achieve open justice. The court has taken into account the degree of risk and jeopardy to a free trial‚ and it is not sufficiently significant or substantial.”

Van Breda then made his way to the witness box‚ remaining calm while Botha walked him through the family history. He spoke about his parents who were married in 1990‚ his brother Rudi who was born in July 1992‚ and his sister Marli who was born in 1998.

He still remained calm‚ describing how his family had emigrated to Perth‚ Australia‚ how he had later enrolled in a BSc degree with a focus on physics‚ and how the family had finally returned with the intent to live on a “very secure estate”.

He said: “We were a very close family – we shared everything with each other and enjoyed spending time together as a family‚ especially around that time of the year. We went on skiing holidays‚ and as many outdoor activities as possible together.”

He and his mother Tersa had often played scrabble together too‚ he said.

Van Breda’s demeanour changed‚ however‚ when the night in question came under the spotlight – 26 January 2015‚ when three family members were brutally hacked to death with an axe‚ and one was left with extreme injuries and clung to life.

He described how it had begun as “an ordinary night”: Rudi had gone for a run‚ Marli was in her room‚ mother Teresa had cooked up supper.

The three men watched a movie together‚ he says‚ and then his father Martin had worked on his laptop.

Later‚ everyone said goodnight and went to their respective beds.

He and Rudi‚ sharing a room‚ had both been on their laptops until Rudi turned in for the night.

Unable to sleep‚ Van Breda says he watched an animated show about pirates‚ and then listened to music with his phone and earphones.

Then‚ needing the loo‚ he went with his phone and played games while he relieved his bowels.

Mumbling and stuttering slightly‚ he said he then heard “strange sounds coming from outside the bathroom”‚ and it “wasn’t a familiar sound”. He said he “immediately got up to investigate”.

“I opened the bathroom door and could then tell that the sounds were coming from the room and I could see the silhouette of someone who appeared to be hitting Rudi.”

He said the person was “standing between the two beds” (his and Rudi’s) and was “swinging an object down to where Rudi was laying”.

His counsel Piet Botha apologised for asking an intimate question‚ but he asked Van Breda if he had wiped himself and flushed the loo after relieving his bowels.

Van Breda‚ clearly shaken‚ said no he had not.

At that point‚ on seeing Van Breda’s demeanour‚ Judge Desai said the court should adjourn for a few minutes.