What a shame ... a government that neglects our painful history 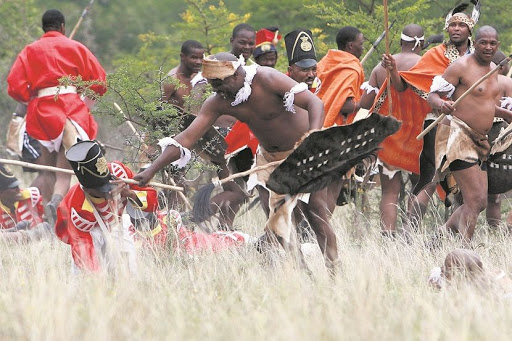 Actors re-enact a Frontier War clash between Xhosa troops and British redcoats in the Mankazana Valley near Alice, Eastern Cape. The writer laments the disregard today for the Xhosa war dead. /ALAN EASON

This is a tale of two war memorials.

One for white people and the other for black people. They repose next to each other just a stone's throw from the historic Grey Hospital in King William's Town.

It is on entering the town that the traveller's eye is drawn to the sign that reads: "Cattle Killing Mass Grave Memorial".

Excited at the prospect of going to see the monument to those who died as a result of Nongqawuse's prophesy, this traveller follows the sign.

In April 1856, 15-year old Nongqawuse and her friend Nombanda went to scare birds from her uncle's crops in the fields by the sea at the Gxara River. When she returned, Nongqawuse told her uncle Mhlakaza, a spiritualist, that she had met the spirits of three of her ancestors.

She claimed that the spirits had told her that the Xhosa people should destroy their crops and kill their cattle, the source of their wealth as well as food. If they did that, the dead would arise and liberate the Xhosa people from British dominion.

After a hundred years of fighting against the British, the Xhosa people were desperate for any sign that would mark the cessation of their suffering. That is why a majority of the community heeded the call, and started killing their cattle and destroying their crops.

But the whites were not driven to the sea, nor did the dead people rise from their eternal slumber. Instead, Xhosa people died of starvation in their thousands. and were buried in a mass grave. It is this mass grave that the traveller is being invited to visit. But to get to this monument, the traveller has to cut across another monument, this one a cemetery of white soldiers and their families who fought and were killed during the so-called Frontier Wars between the invading British colonialists and Xhosa people fighting for their land.

At the entrance to the white people's memorial the traveller is greeted by a well-crafted sturdy wall.

The words on the wall read: "This lychgate and wall were erected by the borough council as a memorial to the soldiers who fell during the 1877-78 Frontier Wars."

As the traveller walks onto the grounds of this cemetery one is struck by how dignified and orderly it is. There is a huge granite wall listing the names of those who are buried here. The grass is carefully manicured.

The traveller gets to the black side of the monument, the Cattle Killing Mass Grave Monument.

The grounds are overgrown with weeds. There are beer bottles, used condoms and other detritus strewn on the grounds.

No flowers, no granite wall with information about the Cattle Killing Mass Grave!

Instead, there is a weather-beaten notice board made of plastic. The writing on this board is long gone. But wait, there is a memorial stone.

Except it looks like some cheap piece of clay. The writing on this stone simply reads: "This memorial was unveiled by the executive mayor councillor Somyo of the Amathole District Municipality on the 30th September 2006".

That's all it says. It does not explain what the Cattle Killing movement was. It is only an indication that someone was given a tender to buy the cheap stone - possibly inflated the price - and got someone to write the words - possibly at an inflated price.

It's a tragedy that such an important piece of our history is not told through this memorial. We need to remind ourselves how the British duped us. It's a shame that a black government, during the tenure of Thabo Mbeki who spoke of an African Renaissance, allowed this to happen. The administration after Mbeki did nothing to correct this. A shame all round.