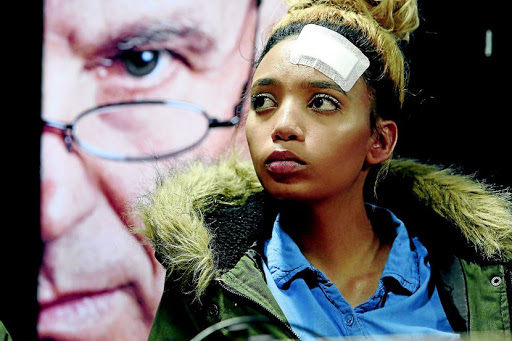 The writer says unlike Gabriella Engels who has 'a face', and therefore a measure of power, another victim of the Mugabes did not trend on Twitter because she is poor. / Alaister Russell

The Zimbabwean embassy has withdrawn an application to intervene in the matter between South African model Gabriella Engels and Zimbabwean First Lady Grace Mugabe.

The Zimbabwean Consul-General alleged in his instructions to Chitando‚ which Chitando read out‚ that “various threats had been made against him (Chitando) while representing the Zimbabwean embassy“.

“I think it is just an effort to taint the process to put them in a position to attack the process later.”

Spies said if the allegations are true‚ they need to be investigated and reported to the police.

Koovertjie in her judgment referred the matter to the Opposed Motion Court.

Spies was surprised by the Zimbabwean embassy withdrawing their application.

“To me it actually shows that they were just showing delaying tactics. The mere purpose of the involvement of the embassy from the outset was to frustrate the process‚ to delay the process and to ensure that justice is delayed.”

AfriForum want to add Mugabe as a respondent to the case as the first step in reviewing the decision by the South African government to grant diplomatic immunity to Mugabe.

Engels has accused Mugabe of assaulting her and two friends at the Capital West 20 Hotel in Sandton‚ Johannesburg‚ on August 13.

In her founding affidavit‚ Engels details how she and her friends visited “acquaintances“‚ when Grace burst in with her bodyguards. Engels and her friends were visiting Mugabe’s sons‚ Chatunga and Robert jnr.

Engels alleges Mugabe hit her with an electric cord with a plug at the end over her forehead. She also had bruising on her thighs.

Mugabe in a statement denied assaulting Engels‚ saying an “intoxicated and unhinged” Engels had attacked her with a knife.

Mugabe said she had intervened on behalf of her sons who were “in trouble with a drunken young woman“.

Engels and her mother Debbie were not in court on Friday.