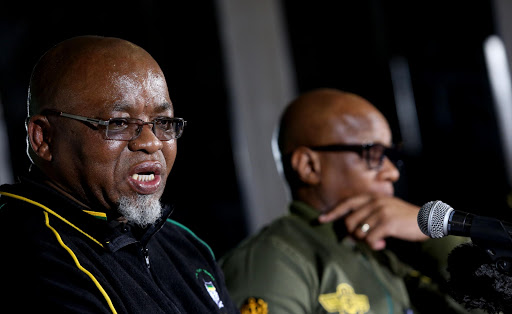 ANC secretary-general Gwede Mantashe is said to have warned MPs of the negative consequences of voting with the opposition in the vote of no confidence against President Jacob Zuma. / Masi Losi

ANC secretary-general Gwede Mantashe allegedly told the party's MPs that if they voted in favour of a motion of no confidence in President Jacob Zuma, the organisation would be torn apart.

Insiders who were present at a hastily convened ANC caucus meeting in parliament before voting on the motion told Sowetan Mantashe warned MPs the ANC would not be able to reach a consensus to elect a new leader because of its internal strife.

"Mantashe told the meeting about the huge implications of voting with the opposition," an insider said.

"He said it would be difficult to agree on a candidate if Zuma is removed because of the ANC's internal problems. He said that meant we would have to go for an early election."

Another MP added Mantashe was very firm that ANC MPs must vote correctly and forget their differences.

When approached for comment, Mantashe said: "That is not your business."

Zuma was allegedly welcomed with a standing ovation when he arrived later while caucus was in session.

Mantashe's pleas for ANC MPs not to support opposition parties' motion appeared to have fallen on deaf ears among some ANC MPs who voted in favour of the motion.

The vote saw Zuma narrowly survive being removed from office. The voting, which showed that some ANC MPs abstained while others voted for Zuma's removal, laid bare the deep divisions within the organisation.

"The best they can do is to resign as ANC MPs. It is clear that they are working with the enemy," Maphatsoe said.

ANC Youth League Gauteng chairman Matome Chiloanecalled on the party to launch an internal investigation into how the organisation's MPs voted. Chiloane said the decision by ANC MPs to vote with the opposition was going to set a bad precedent if they are not punished.

"ANC members in provincial legislatures and municipalities will no longer toe the party line," Chiloane said.

Former ANC treasurer-general and presidential hopeful Mathews Phosaaccused ANC MPs of "defending a corrupt leader. They did not respond to the onslaught the ANC is facing. The ANC has been left bleeding in the eyes of the public".