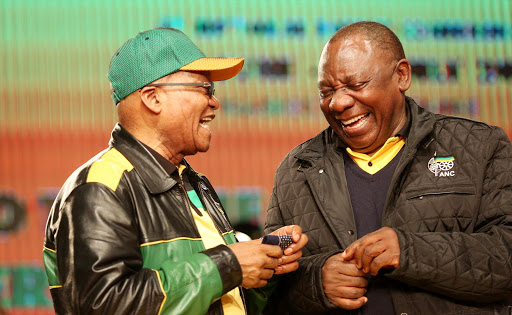 The media reported on the national policy conference of the African National Congress (ANC) through the perspective of power struggles. This wasn’t far off the mark. While the ANC’s internal election campaign for its December conference - at which it will elect a new party leader - has not yet officially opened, in reality its party election campaigns are similar to US primaries, which run for an entire year.

In fact power politics was underway long before the national policy conference started just outside Johannesburg on June 30th. Before policy motions were submitted, ordinary members are supposed to seek approval from branches. They then purportedly go to regional and finally provincial policy conferences.

But the reality was much rougher. The experience in the Western Cape, one of the nine ANC provincial structures, provides a good example. Its provincial policy conference started two hours late, and then had an hour and a half of disguised electioneering for Cyril Ramaphosa – the deputy president – complete with rival sing-alongs by some 60 supporters of Ramaphosa and 30 supporters for rival contender Nkosazana Dlamini-Zuma. Next, branch after branch took the floor to complain that they had not been allowed to register for the provincial policy conference.

The Provincial Executive Committee, with observers deployed by the party’s National Executive Committee, explained that the province had only been allocated 155 delegates to the national policy conference. This was less than the number of branches in good standing. (To be in good standing, a branch must have at least 100 paid up members. Only branches in good standing are allowed to send voting delegates to any conference.) So they had selected branches to ensure representation by geography and demographics. After continuing protests, the conference was abandoned without any debate over branch policy motions.

Political contestation likewise preceded – and had an impact on – the national policy conference. The ad hoc action grouping of 101 ANC veterans and stalwarts turned down an offer of interceding during the first two days of the conference, partly on the grounds that the delegates would not have been mandated by their branches on how to vote. The veterans had been publically criticised by President Jacob Zuma.

And the composition of the national policy conference was altered to allocate double the number of delegates originally designated for both the ANC Women’s League and Youth League. (Between 3 700 to 5 000 delegates reportedly attended the conference). Since both had publically endorsed Dlamini-Zuma over Ramaphosa, this move tilted the voting power of the rival blocs.

A combination of the pre-conference politicking, plus the machinations just before it met meant heightened tensions between rival factions. Plus eagerness for report-backs to branches.

Efforts to stop the party splitting

The media highlighted decisions that were symptomatic of the struggle between the Ramaphosa and Dlamini-Zuma blocs. After debate, Zuma proposed that in the December election for party president, whichever candidate came second should automatically become ANC deputy president. This was proposed as a mechanism to prevent splits in the party as happened in 2008 when COPE was formed, and then again in 2013 when the EFF was set up.

That Zuma and Dlamini-Zuma support this motion indicates that they are uncertain they will win in December.

The media also flagged four motions as examples of the Ramaphosa faction outvoting the Dlamini-Zuma faction:

This outcome is interesting because it indicates that while Zuma has a voting majority at the national executive committee, he does not have one at the level of the branches. It appears that the cumulative impact of the steady drip, drip of front page corruption scandals, the Nkandla judgment of the Constitutional Court, and the Gupta email leaks, have alienated branches one by one.

What are the chances of any of the policy motions agreed at the policy conference being implemented? Common sense is a good guide. Where the relevant cabinet minister strongly opposes any motion, it will not usually survive. On top of this, when the ANC-as-party recommends them to the ANC-as-government, Treasury will speak up on the cost implications.

An example from earlier conferences serves to make the point. More than a decade ago, a conference policy motion urged that school feeding be extended from primary schools to high schools, for a full cooked meal per day. When the motion was finally accepted by the ANC-as-government it had been amended by removing the reference to a cooked meal, and the insertion of the phrase “the progressive realisation of”. And that is what happened.

Now it’s over to the official opposition, the Democratic Alliance (DA), and the Economic Freedom Fighters (EFF), and the Inkatha Freedom Party (IFP). When will they hold regular periodic policy conferences to give their grassroots members in branches the opportunity to revise and update party policies?

Where this leaves the country is that there are no major changes in ANC policies. We can expect escalating campaigning by rival ANC factions all the way until the ANC national conference in December. The race is now wide open between Ramaphosa and Dlamini-Zuma, with the margin between them both constantly shifting and too close to call.

This in turn could have a major impact on abstentions by voters who previously supported the ANC – or lack of them – in the 2019 general elections.

Keith Gottschalk is Political Scientist, University of the Western Cape