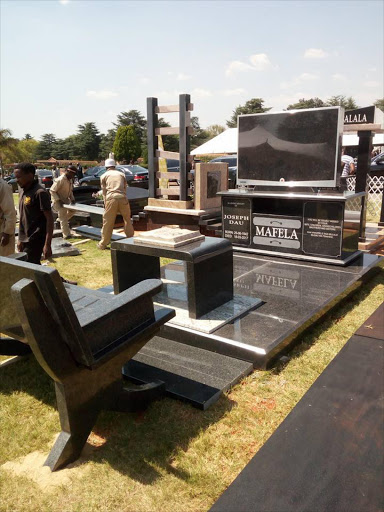 The 14-piece granite tombstone of the late actor and singer Joe S'dumo Mafela was re-erected yesterday after it was not erected on the day of his burial last week as intended.

It took a large truck with a mounted crane, five men and more than 30 minutes to off-load the pieces from the truck. Altogether the pieces weigh between five and eight tonnes and take up about three square metres and with a height of more than 2 metres. It took the men more than three hours to assemble it.

The tombstone, which resembles a living room with a plasma TV, a TV decoder stand and a couch, created a lot of buzz on social media last week.

Its designer, Lebohang Khitsane, who is also the CEO of Bataung Memorials, defended the decision to remove it and said it was not done to offend anyone or break customs.

"We just wanted the concrete to set before we could put the tombstone on it and had we not waited, this stone would have collapsed. We brought [it] here on the day of the funeral as per the wishes of the family because they wanted Bra Joe's relatives who had come from outside the country to also see it. We returned the stone to the factory and not the family home," Khitsane said.

He said the family wanted to carry out the burial and the unveiling on the same day to avoid incurring more costs.

He wouldn't reveal how much the tombstone cost. It has been reported that it was worth more than R100000.

It took Khitsane three days to complete the piece after he consulted with Mafela's family.

"They gave me free range to come up with ideas. The lounge reminded people of when we were young and how Bra Joe's TV shows would keep us indoors."