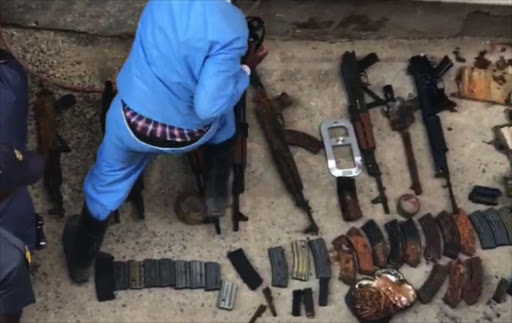 Police from the Crimes Against the State unit have seized more hand grenades and explosives from storerooms in the basement of a Johannesburg building.

The new seizure was made after building renovators discovered an arms cache in the Randburg building on Monday.

The building‚ which is part of a larger shopping complex with 12 flats‚ was sealed off by specialised police officers‚ including bomb disposal and forensic experts.

The latest seizures are believed to have been made after officers discovered several more storerooms while searching another section of the basement.

Detectives were on Tuesday mum on the identity of owners of the storeroom and building.

Police spokesman‚ Captain Mavela Masondo‚ said that an inquiry had been opened.

He said the current building owner had been questioned by detectives‚ “who have also interviewed a number of other people“.

“Our investigators are currently trying to track down the previous owner.”

He said the scene was still “active“.

He declined to elaborate on what explosives had been found.

“Once we have finished clearing the scene we will be able to comment further. At this point... our officers are still on the scene and are continuing to search the building.”

Masondo said that no suspect has been identified.

TMG Digital has learnt that detectives have discovered two other storerooms in the basement where the latest munitions were recovered.

It’s understood that the storerooms were heavily fortified and that it took police several hours to open them.

A police source said that fears of the storerooms being booby-trapped led to specialised equipment being used to scan the rooms before they were opened.

A policeman said the cache was huge.

“Whoever was storing this had a sinister purpose for these weapons. Yes some are old and rusty‚ but others are well maintained‚ covered in protective wraps. Lots of these weapons are in good working order.”

TMG Digital has learnt that among the latest munitions to be seized were two suspected suicide bomb vests‚ which another police source said were fitted with apparent detonator switches.

Masondo said once the search was finished police would reveal the exact number and type of weapons recovered. — TMG Digital