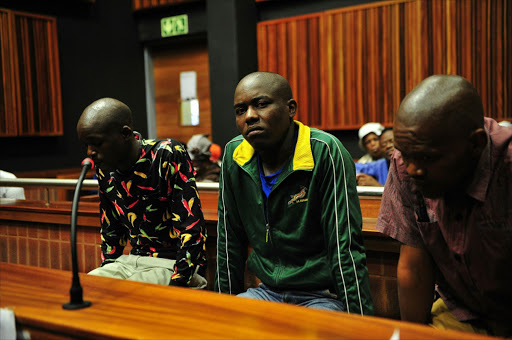 Three men have been found guilty of drowning two men and gang raping their partners and robbing them of their belongings at Rhodes Park in 2015.

Judge Papi Mosopa said on Tuesday that the state had proved its case beyond reasonable doubt.

“The evidence of the accused is false and needs to be rejected‚” said Mosopa.

The three accused — Thabo Nkala‚ Edmore Ndlovu and Mduduzi Mathibela — had pleaded not guilty to all five charges‚ including robbery with aggravating circumstances‚ two counts of rape and two counts of murder.

The men were part of a group of about 12 who accosted the two couples who were taking a walk in the park in the early evening of October 17‚ 2015.

The survivors‚ Jabu Mbatha and Siphokazi Tyeke‚ were gang raped by the armed men.

They wept as Mosopa read out his verdict in the South Gauteng High Court.

Tyeke and her husband Sizwe had gone for a walk in the park in Kensington‚ Johannesburg‚ together with Mbatha and her fiance Zukisa Kela when they were attacked.

Tyeke and Mbatha’s partners were stripped naked‚ their hands tied behind their backs and drowned in the dam.