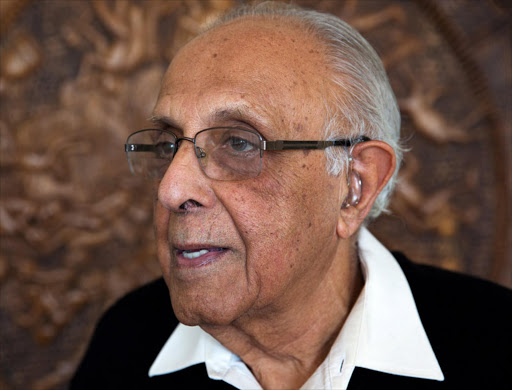 Anti-apartheid struggle stalwart Ahmed Kathrada’s recovery from his operation has been “slower than hoped for”‚ his foundation said on Wednesday.

Kathrada‚ 87‚ was hospitalised on March 4 for surgery related to blood clotting on the brain.

The Ahmed Kathrada Foundation’s Director Neeshan Balton said that the veteran had “experienced several health-related setbacks‚ making the prognosis of his illness unpredictable”.

“He remains in hospital with everything being done to assist his recovery‚” Balton said.

He added that visits from members of the public are still not permitted due to hospital regulations and the necessity for a restful period of recovery.

“We have been overwhelmed by the immense support‚ both from within South Africa and abroad. We continue asking for your prayers during this period‚ both for Mr Kathrada and his family and friends‚” Balton stated.

He indicated that members of the public were welcome to post their ‘get well soon’ on the Foundation’s specially set up Facebook page – Well Wishes to Uncle Kathy (https://www.facebook.com/Well-Wishes-to-Uncle-Kathy-270052456772587/)‚ or by emailing info@kathradafoundation.org.

“We have also had requests from people about where they can leave cards bearing messages of support‚ or flowers. This can be dropped off at the Foundation’s offices (in Lenasia).

“All of the messages that we have received will be collated and passed on to the family‚” Balton said.

Kathrada is one of three Rivonia Trialists still alive today; the other two being Andrew Mlangeni and Denis Goldberg.

Professor Achille Mbembe will tomorrow deliver a lecture on Kathrada and his lifelong activism against racism. The event is being hosted during Anti-Racism Week (March 14-21)‚ an initiative spearheaded by the Anti-Racism Network South Africa (ARNSA).